From Organic Design wiki
Jump to:navigation, search
More posts by Nad: < Prev | Next >
Posted by Nad on 09 October 2016 at 11:23
This post has the following tags : Our forth year on the land

We thought we were going to have a good crop of German raspberries this year because the cutting we planted that we got from Arca Verde really took off! But then the leaf-cutter ants found them :-(

They completely decimated over half of them in a couple of days (along with the lemon tree). We found that PVC pipes with habanero oil on the sides stopped them so I protected the lemon tree and the most healthy raspberries, but there are too many stalks to protect them all, and they're a lot of work too maintain with oil, so we had to let the ants have the rest :-(

Then a few days ago we had some unexpected visitors - Maneco's neighbours decided to come and see our place and introduce themselves which was nice :-) Just as they were leaving one of them noticed the PVC pipes and asked if we had ant trouble - he told us that ants don't like to cross sheep wool and to just wrap a piece around the bottom of each plant and it will last for ages with no maintenance required!

So we went to Ziza's the next day to collect a bunch of old wool off the ground and gave it a try. It's true that they really don't like it, but they're incredibly persistent and still crossed over it. But I found that it's the small hairs in the wool that cause them trouble and that if you part the wool a lot to fluff it up it becomes too difficult for them to traverse. It seems to be working so far, I can see most of them carrying clover again now :-) 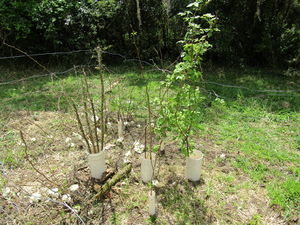 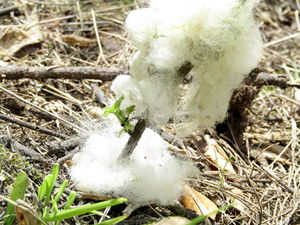 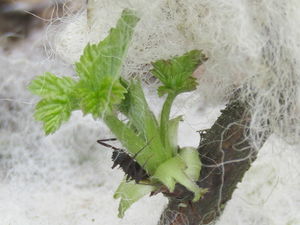 The first photo shows the pipes, and you can also see the wool at the base of the un-piped ones. Notice how much leaves the piped raspberry on the right has? That's how they all were before the ants got them!

The second photo shows a close up of the wool around the base of a raspberry, and the final one shows an ant that crossed over before I had started puffing them up more - even un-puffed you can see all the tiny strands getting in its way. Remember you can click on the pictures to see a large version.