Cycling from the land 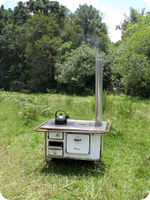 Sheldon Brown died a couple of years ago, but his stuff is the oldest and the best. Often when I'm googling tech info, his site will be the first result.

Jobst Brandt's stuff. I love him - he's only ever had 2 bikes, and he only got the second one because he wrote off the first one in a crash. He's more purist than me. Very technical, but no bullshit, and that's very rare in the cycle trade.

Ken Kifer on living in cabins in the middle of nowhere and living with bikes. This guy was really ontoit and much of what he wrote will apply directly to you guys.

Jan Heine published some gorgeous coffee table books of old French bikes, which I own and drool over regularly. He's like me but moreso - will ride 1200 Km in one go, for instance. He also bought the rights to the Rene Herse brand and they are now made in Colorado (at US$6K for a frame). The Japanese, who only copy the best, reckoned Rene Herses were the best bikes ever made, and I agree.

So read his posts for ideas of what works and has stood the test of time, as an antidote to bike shop bullshit. There's no need to spend big money, but the principles he describes - like dampening vibration at its source by using fat, supple tyres instead of a suspension fork, which costs more, is heavier and will wear out - make heaps of sense. Also Jan's stuff is a good antidote to Racing-ism. Race bikes have always influenced shops and that can be a good thing, but nowadays it mostly means fragile, overpriced stuff that's designed to make you go fast, not to make you comfortable. Remember, racing is about pain tolerance, not speed!

You need to know about Velocio. This is a writeup on him by Clifford Graves, who is a legend in his own right. He was largely responsible for bring French touring bikes to America, and taking lots of young Americans on tours in France. He rode a Rene Herse.

So have a dip into these links and you'll have a good theoretical grasp of what's what. Then you can go shopping, knowing that you'll know more than the sales guy, which is as it should be!

Anyway, Xtracycle started it all.

Then Surly made a frame all in one piece, which is stronger.

These long bikes are only a bit heavier than normal ones, and are almost as nippy in traffic. And they're less hassle than a trailer in many situations.

Then there's the Yuba Mundo. These are more primitive than the Surly Big Dummy - heavier frame, cheaper headset and cranks - but they're cheap (koz they're made from cheap, heavy steel) and are very strong. You can take a couple of fridges on the back, no worries. And if you're carrying two fridges, who cares how much the bike weighs? Would not recommend for you guys koz they're just too heavy - but they're perfect for electrification.

I never use it, because all my gear weighs less than the trailer itself (6 Kg) but I have several touring buddies who always use them. They're very popular, and for good reason.

A more modern take on the same idea is the Polish Extrawheel. Less carrying capacity, but only weighs 2 Kg. I haven't seen on in real life.

Then Surly made a couple of really nice two wheelers. Probably overkill for your purposes, and two wheels are not great on rough roads.

So I reckon either a long bike - there are several similar to the Surly Big Dummy available - or ordinary mountain bikes with a BOB trailer would suit you guys well.

And of course you can just use racks and pannier bags, though personally I find them a hassle koz they tend to pop off on rough stuff, get snagged on things and it's 2 or 4 bags to hunt through instead on one big one (ie a trailer). That should get your imagination going. I will follow up later with some specific ideas on bikes for you in a few days.