Difference between revisions of "E" 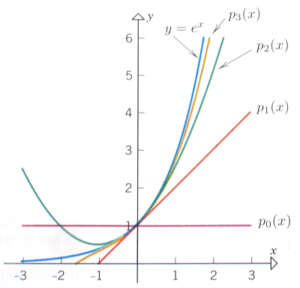 The role that the exponential function (ex) plays is extremely significant to an understanding of the laws of nature and harmonic organisation. Mathematically (ex) can be expressed several ways. A common form is the Maclaurin series expansion of;

Expansion of the right hand side terms is an outer product, taking the summation of these terms equals e2.

This formula needs to be checked and converted to LaTeX

As an infinite sum ex is;

We can look at the construction of this relation more easily by describing it by an algorithm. We can remove the power and factorial operations by basing the current numerator and denominator values on the previous values:

But a better conceptual representation is to restructure it such that the division occurs outside the main loop since its also a higher-level operation. So each iteration is now maintaining the value of a numerator and denominator which represent the entire preceeding series as a single fraction which can be reduced afterwards.

The nth roots of unity, or de Moivre numbers, are all the complex numbers which yield 1 when raised to a given power n. It can be shown that they are located on the unit circle of the complex plane and that in that plane they form the vertices of a n-sided regular polygon with one vertex on 1.

but for non-natural values of z, the above equation does not apply, since the factorial function is not defined.

If the real part of the complex number z is positive, then the following integral converges absolutely:

An interesting property is the Gamma functions link to π;

Taylor's theorem expresses a function f(x) as a power series in x, basically because the nth derivative of xn is n!.

So maybe the n! denominator in talor-series of ex should be thought of as the nth derivative rather than as combinatorial. --Nad 12:16, 12 July 2007 (NZST)

Actually, the Taylor series article explains it - the theorem in general for a function f(a) is,

The volume of an n-dimensional hypersphere can be expressed as:

Note that the Gamma function is required for odd dimensions and that its value cancels out the apparent fractional power of π in those cases.