Difference between revisions of "Ouch!"

Yesterday I was putting in a new fence post when my finer got pulverised with the sledge hammer somehow!

I knew it was going to hurt so I clasped by damaged hand with the other one and was horrified to feel the end of the finger moving about loosely in the end of the glove!

I ran back to the house, and on the way I was imagining the damage, it felt like half my finger was hanging off and I didn't know what state the other fingers were in either. And worst of all if no neighbours were home I may have had to suffer here in pain and loose the fingers completely. For the first time I was really scared of how isolated we are :-(

When I got back to the house I took the glove off carefully and found that it wasn't as bad as I had imagined, it was only one finger seriously damaged, and only at the very end. The ring finger on my right hand was a real mess at the end and snapped about where the nail starts.

Fortunately Vladimir, the closest neighbour, was home and drove us to the hospital in São Francisco about an hour's drive away. They didn't have a bone specialist there though so they just bandaged it up better and put aesthetic in it since it was really painful now, and sent us on our way to Canela about half an hour away.

The guy at Canela took the nail off and stitched it up and reckons I won't have to loose the end of the finger. He said the nail should grow back, but I have to see him again Monday to know for sure what the situation is.

I'm Not really sure how my finger was in the way, but it's a powerful lesson about how we have to be much more careful, and account for the fact that the brain's not working properly after doing a lot of hard physical work! It's also a lesson about how we really do need a working car out here, because a real emergency could happen at any time, and it may well be the difference between life and death :-/ 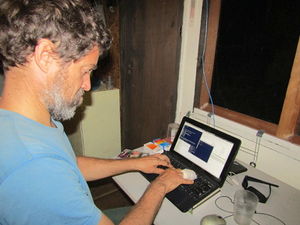 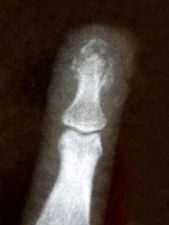 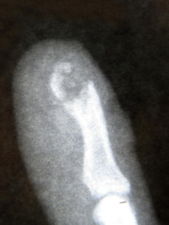