The term price system is used to describe any economic system whatsoever that effects its distribution of goods and services by means of goods and services having prices and employing any form of debt tokens, or money. Except for possible remote and primitive communities, all modern societies use price systems to allocate resources. However, price systems are not used for all resource allocation decisions today. A variety of non-market economics type proposals have been presented as alternatives to a price system such as energy accounting.

Yes, Banks DO Create Money Out Of Thin Air!

Under the current fractional reserve banking system, banks can loan out many times reserves. But even that system is being turned into a virtually infinite printing press for banks.

If you’re still not convinced that banks create money out of thin air, without regard to whether or not they have deposits on hand, please note that the Fed has said as much.

And much more additional proof can be found here. The source of this information came from an excellent article at globalresearch.ca here. And highly recommended also is Steve Keen's book Debunking Economics.

Why is this money-out-of-thin-air fact so important?

Even if banks don’t really loan based on their deposits and reserves, who cares? Why is this such a dangerous myth?

Because, if banks don’t make loans based on available deposits or reserves, that means:

More quotes about the financial system

The Nature of Money & Credit

(from Wikipedia:Social Credit)
Major Douglas also criticized classical economics because it was based upon a barter economy, whereas the modern economy is a monetary one. To the classical economist, money is a medium of exchange. This may have once been the case when the majority of wealth was produced by individuals who subsequently exchanged it with each other. But in modern economies, division of labour splits production into multiple processes, and wealth is produced by people working in association with each other. For instance, an automobile worker does not produce any wealth (i.e., the automobile) by himself, but only in conjunction with other auto workers, the producers of roads, gasoline, insurance etc.

In this view, wealth is a pool upon which people can draw, and the efficiency gained by individuals cooperating in the productive process is known as the “unearned increment of association” – historic accumulations of which constitute what Douglas called the cultural heritage. The means of drawing upon this pool are the tickets distributed by the banking system.

Initially, money originated from the productive system, when cattle owners punched leather discs which represented a head of cattle. These discs could then be exchanged for corn, and the corn producers could then exchange the disc for a head of cattle at a later date. The word “pecuniary” comes from the Latin “pecus,” meaning "cattle". Today, the productive system and the distributive/monetary system are two separate entities. Douglas demonstrated that loans create deposits, and presented mathematical proof in his book Social Credit.

Douglas believed that money should not be regarded as a commodity but rather as a ticket, a means of distribution of production "There are two sides to this question of a ticket representing something that we can call, if we like, a value. There is the ticket itself – the money which forms the thing we call 'effective demand' – and there is something we call a price opposite to it." Money is effective demand, and the means of reclaiming that money are prices and taxes. As real capital replaces labour in the process of modernization, money should become increasingly an instrument of distribution.

Douglas also claimed the problem of production, or scarcity, had long been solved. The new problem was one of distribution. However; so long as orthodox economics makes scarcity a value, banks will continue to believe that they are creating value for the money they produce by making it scarce. Douglas criticized the banking system on two counts:

The former Douglas identified as being anti-social in policy. The latter he claimed was equivalent to claiming ownership of the nation. Money, Douglas claimed, was merely an abstract representation of the real credit of the community, which is the ability of the community to deliver goods and services, when, and where they are required.

The Problem of Usury

Profit and interest should be kept within the realm of personal agreements and not be part of the system itself otherwise it takes on the power of money creation and can gain control over its value.

In a serious consideration of the subject therefore it is necessary to particularise carefully. Jeffery Mark saw this clearly and in his Analysis of Usury (Dent. 1935) (p26) he distinguished a major and a minor variety, thus;

there are two forms of usury. the major form is that represented by bank loans and the discounting of bills, and the minor form by the creation of interest bearing savings, investments, or inheritances, which as government or municipal stock, industrial shares, bonds, debentures, mortgages, or capital claims on land, plant and property, make up the debt structure in every country. The common and essential feature in all these processes, here comprehended as the major and minor principles of usury, is the payment of money interest on money lent.

... we must always differentiate between lending by private persons and lending by banks or other credit making institutions. In the later case they create the means of payment out of nothing and then proceed to appropriate both capital and interest.

Here's an excerpt from an article by Trace Mayer on 24hgold.com: The usurer has lent his money to one who takes it of his own free will, and can then enjoy the use of it and relieve his own necessity with it, and what he repays in excess of the principal is determined by free contract between the parties. But a prince, by unnecessary change in the coinage, plainly takes the money of his subjects against their will, because he forbids the older money to pass current, though it is better, and anyone would prefer it to the bad; and then unnecessarily and without any possible advantage to his subjects, he will give them back worse money …. In so farthen as he receives more money than he gives, against and beyond the natural use of money, such gain is equivalent to usury; but is worse than usury because it is less voluntary and more against the will of his subjects, incapable of profiting them, and utterly unnecessary. And since the usurer’s interest is not so excessive, or so generally injurious to the many, as this impost, levied tyrannically and fraudulently, against the interest and against the will of the whole community, I doubt whether it should not rather be termed robbery with violence or fraudulent extortion.

Usury is often considered the root of the problem, but it is a logical necessity within the context of a system in which money is a scarce commodity. Money should not be something scarce, with very few people having an abundance while the majority is short of it. This is because it should play the role of the "ticket" by which resources are distributed throughout the system. A system which is properly designed to organise the global allocation of resources amongst all its parts would ensure that all of the members composing it be in an optimal state of well-being. To do otherwise would be equivalent to an organism preventing its blood from flowing to some parts of its own body.

This ties in to the UBI ideas via the redeemable bond associated with each person. Technically, the UBI is not a hand-out, but rather a dividend on each persons share of the total wealth of the nation (in this case the "nation" being the network). This approach also avoids the severe problem of giving the state the power to engage in plunder using the law, which is a problem since it is a violation of peoples liberty.

The sender may distribute material via email and Web site without profit to those who have expressed a prior interest in receiving it for research and educational purposes only. I believe that this constitutes a fair use of any copyrighted material as provided for in Title 17 U.S. Code, Section 107. If you desire to use copyrighted material from this source for purposes that go beyond the fair use statutes, you must obtain permission from the copyright owner.

In 1862 the creditors of America, the Bank of England, sent the following circular to every bank in New York and New England:

"Slavery is likely to be abolished by the war power. This, I and my European friends are in favour of, for slavery is but the owning of labour and carries with it the care of the labourer, while the European plan, led on by England, is for capital to control labour by controlling the wages. This can be done by controlling the money. The great debt that capitalists will see to it is made out of the war must be used as a means to control the volume of money. To accomplish this, the bonds must be used as a banking basis. We are now waiting for the Secretary of the Treasury to make the recommendations to Congress. It will not do to allow the greenback, as it is called, to circulate any length of time, as we cannot control that."

"When through a process of law the common people have lost their homes, they will be more tractable and more easily governed by the strong arm of the law, applied by the central power of wealth, under the control of leading financiers. People without homes will not quarrel with their leaders. This is well known among our principal men now engaged in forming an IMPERIALISM OF CAPITAL TO GOVERN THE WORLD. Thus by discreet action we can secure for ourselves what has been generally planned and successfully accomplished."

That was part of a leaflet called the "Bankers' Manifest" printed for private circulation among leading bankers only. It appeared in 1934.

While on the subject of banks and debts, it is evident considering their nature that the banks are more powerful than the Government of the United States, for if they were not, there would: be no such thing as a National Debt. National debts are unnecessary in a country with the real and potential wealth and resources as the United States; they are the greatest of national burdens and the evils the Government would be foremost in avoiding. But on the other hand they are the biggest source of riches and control in the hands of the American financial system. That we have a National Debt is not only evidence of the real rulers of the nation, but the extent of the debt is a true indication of the extent of this rule.

It is absurd that the Government should be forced to borrow that which it has, under the Constitution, the power to create!

Ever since the banks were given the right to issue money, panics, financial depressions, famines, and the inevitable increase of crime have been periodic occurrences. In America the average is about every twelve years. They shall continue until the government assumes its natural prerogative of issuing money, and confining the work of bankers to banking.

Excerpts from the book: Citadels of Chaos 1949. 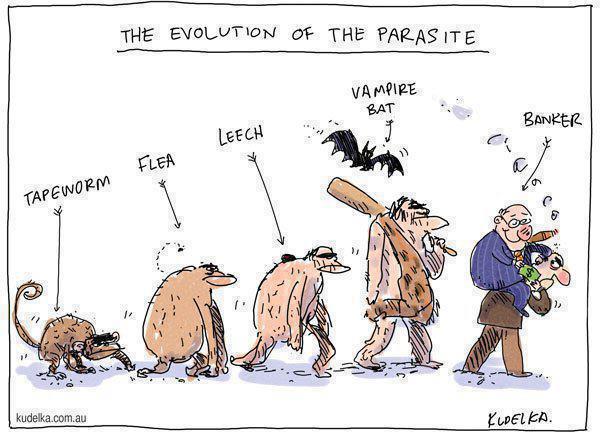