We bought a Lada Niva on August 12th 2012 as we needed a rugged car for accessing our land which is at the end of 20km of dirt road and is not accessible with a normal family car in bad weather. We then sold Nivinha on the 31st July 2016 because she was broken down in the garage for over a year and we didn't have the expertise to keep her running. She's been replaced with a Renault Sandero which is not ideal for our terrain, but we've made a garage in the field so we don't have to take the new car through the forest.

Most Lada's have a bad reputation, but the Niva is the exception and it has many features which make it a perfect choice for our situation.

The Niva (a.k.a VAZ 2121) was described by its designers as a “Renault 5 put on a Land Rover chassis.” It was Lada's first non-Fiat based model. Much of its mechanicals are carried over from the Fiat based Lada models, though the body, four-wheel drive system, and front suspension were designed by Lada. Production began in 1977 and continues today (as of 2012) with only minor changes to the engine, rear hatch design, and interior trim levels.

In basic form, the Niva has a carbureted 1.6-litre overhead cam four-cylinder petrol engine producing 54kW (72hp) and 126N·m, a four- or five-speed manual transmission, and full-time four-wheel drive. The four-wheel drive system employs three differentials (centre, front and rear), similar to manual-transmission Toyota FJ Cruisers. There are no locking hubs. The transfer case involves a high/low range selector lever and a central differential lock lever. Low range can be selected with the centre differential locked or unlocked. The original Niva has a maximum speed of around 130kph, and can cruise at 90kph while consuming petrol at 8.25L per 100km. Its towing capacity is rated for up to 860kg.

Our Niva runs on alcohol instead of petrol or diesel which means that we can make our own fuel if (when) petrol prices become impractically high, or the supply-chain distribution system breaks down due to economic issues rendering gas stations useless. All in all, the Lada Niva is one of the best post-apocalyptic vehicles on the market!

We were on our way back to our place in Canela one evening with about 5km of dirt road remaining when we heard a huge thud followed by strong grinding sounds! It sounded as if the gear box had suddenly blown up or something! We took a look under the car and soon found the problem - the transfer case had broken off from the bottom of the chassis! the left hand side was rusted and the bolts had ripped out.

This could have been a really bad night because even though we could see what the problem was, we didn't have anything in the car we could fix it with! luckily within half an hour three gaushos came by in a delivery truck, and even though they didn't have any tools either, they said they could bring something back as they were dropping off a delivery and then coming past again about 10 minutes later. I decided the best bet would be to ask them to come back with some pliers and fencing wire so I could then do some in-the-field gambiarra to temporarily get the transfer case back in to position so we could get the rest of the way back to Canela and get it fixed up properly by a mechanic on Monday :-)

This is often a problem when driving off road and many people reinforce their transfer-case mountings using a variety of methods. 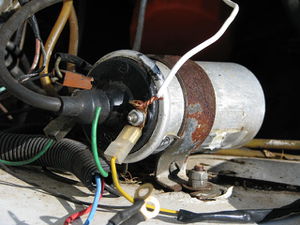 Poor Nivinha was stuck in the forest again for over a month at the start of 2014 when we were carrying some wood from the field to the house and she suddenly stopped. We couldn't start her again, the started motor would go and the engine turn while the key was in the start position, but when the key was released to let the starter motor stop, the engine would also stop.

We talked to one of the neighbours who said that it was the ignition barrel needing to be replaced and that a VW one should would ok. Beth sent me to get the replacement from a shop on the main road when we were in Canela, but I miss-heard the instructions and went to our 4x4 mechanic Fernando instead. Luckily he was really helpful and even though he didn't have the right part, he explained that I could temporarily fix the problem by attaching a wire from the positive of the battery to the positive of the coil and remove it when we want the engine to stop. This worked very well and we were able to get Nivinha out of the forest back home :-)

To fix the problem, I first removed the ignition barrel (this short video shows how to do that). The main catch is that the key must be in the ignition and turned to the first clockwise position before it can be removed, also there's a small catch that has to be depressed by poking a screwdriver into the hole (a little above the left hand mounting screw on the barrel). I then opened the barrel by removing the metal ring from the end with the contacts. I found that there was some bad corrosion on one of the copper plates causing it to lift off from the contact. I filed off the corrosion and also added some solder to the contact and the plate since the copper was also very thin and cracked. I then tested the connection with a multimeter and saw that the problem had been solved, so I put it all back together and reinstalled it into the car!

Clutch fluid has been leaking from the slave cylinder barrel and we keep having to top up the reservoir every time we use the car. So we ordered a new one which recently arrived. I was going to get the mechanic to replace it, but the old one finally gave out completely when we were about to leave the land for Canela, so I was forced to do it myself! This was for the best though because I did the replacement successfully and now feel much more confident about doing repairs on it :-)

The replacement procedure wasn't too bad, first I familiarised myself with the parts involved by checking some of our Niva manuals, and watched a couple of videos on Youtube about replacing cylinder barrels (I couldn't find any specifically for Lada Niva, but the general procedure's the same for most cars). Then I did the procedure, it looks to me like there was actually nothing wrong with the old one, it was just installed badly making the movement of the arm force the rubber grommet to slide away from its proper position on the cylinder piston onto the thread allowing the fluid to leak. I put the new one in with the position of the arm slightly closer to avoid the same thing occurring again.

The lower bolt wouldn't screw in tightly because the thread was rusted out in the hole for it in the chassis, so the next day I took it out and instead put in a plastic anchor used for screwing into concrete and used a screw and washer instead of the bolt. The engine may get too hot and melt the anchor though in which case I'll try using some high-temperature hose for the anchor and if all else fails I guess I'll have to drill the hole out a little bigger and put a new thread in it for the next larger size of bolt.

You can see from the photos above that we're also missing our retractor spring, but it doesn't seem to make any difference to operation so we probably won't worry about it.

The next thing I need to do is replace the idler arm. We took the Niva in to have the wheels aligned some time back and they said that we really needed to order a new idler arm and get it replaced before too long. Some indications of a bad idler arm are:

The new one arrived a month or so back and we hadn't got round to taking it to the mechanic to put in. But now that I've successfully replaced the clutch cylinder I feel like I should have a go at replacing the drop arm myself as well.

This procedure is a fair bit more complicated than the cylinder barrel though as there are some very difficult ball pins to remove. They should really be removed with a special tool, but I've seen a few pics and videos of people doing with G-clamps or jacks. The pin needs to be clamped together so that when the nut is undone the powerful spring inside doesn't fire the pin out like a bullet. The ball pin needs to have a lot of grease put on it before re-inserting it into the joint body, I'm not sure what kind of grease is available here yet, but a popular type that would be suitable is Mobil-1 synthetic grease. This has also been used in the CV-joint by various people documenting their Niva repairs.