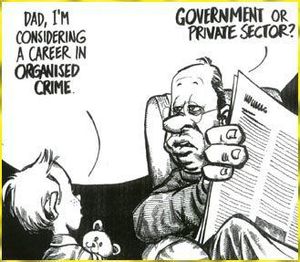 When talking to people about freedom, liberty and the ideals of creating a new Agorist society which is free from state-tyranny, many people are confused and can't understand how a civilised society would even be possible without the state. But all aspects of society such as technology, health, education and even financing of industry, justice and policing can all be carried out more effectively in a voluntary social mechanism than by the state mechanism that can only maintain a membership at the point of a gun.

This is because the state is by it's very nature corrupt, and can only ever tend towards greater inefficiency and oppression. To understand why, it's important to remember that the state originated through rape, pillage and plunder and has changed only in it's increased magnitude and by evolving better methods of keeping it's true nature hidden from the people.

The origin of the state

When most of humanity settled into peaceful farming communities, with perhaps larger marketplaces (remember the original agora of Greece) in towns, some people discovered a means of surviving parasitically from the productivity of others. They formed robber bands and attacked towns and settlements, plundering, raping, and murdering. Probably the original barbarian hordes were hunters who took to hunting man when their game died out rather than taking to farming, trading, or productive manufacture.

These roving groups were a small minority (or their victims would have died out and they as well) but large as compared to a single town or village. Somewhere along the way, one of them discovered that they could allow the peasants to live with enough to survive on and come back at the next harvest for another raid.

Then these raiders had another idea: they would stay in the same towns, steal lightly but regularly, murder enough to keep the peasants and merchants in line, and live well. Other areas, seeing these petty kingdoms arise, decided to submit themselves to their own home-grown warlords so that they would not fall prey to foreign warriors.

Parasites must remain a minority or kill their hosts. So they discovered religion (and later ideology) as a means to intimidate peasants and win the all-important sanction of the victim (an apt phrase of Ayn Rand's). Brutal thugs became "kings by divine right" and some very powerful statists called Emperors, Pharaohs, or Tsars were said to be divine, the unstoppable choice of gods.

And so these barbarian raiders institutionalized plunder (taxation), murder (execution and warfare), and even rape (droit de seigneur, for example). They took control of roads to plunder the caravans (tolls, tariffs), they suppressed all rival criminal gangs with their own (police), and established their own churches, schools, judges, and even philosophers, minstrels, and artists to work in their royal courts. Thus was born the State.

"Stop!" cried the traveller. "What God does is well done. Do not claim to know more than He. God has given organs to this frail creature; let them develop and grow strong by exercise, use, experience, and liberty."

God has given to men all that is necessary for them to accomplish their destinies. He has provided a social form as well as a human form. And these social organs of persons are so constituted that they will develop themselves harmoniously in the clean air of liberty. Away, then, with quacks and organizers! Away with their rings, chains, hooks, and pincers! Away with their artificial systems! Away with the whims of governmental administrators, their socialized projects, their centralization, their tariffs, their government schools, their state religions, their free credit, their bank monopolies, their regulations, their restrictions, their equalisation by taxation, and their pious moralizations!

And now that the legislators and do-gooders have so futilely inflicted so many systems upon society, may they finally end where they should have begun: May they reject all systems, and try liberty; for liberty is an acknowledgement of faith in God and His works.