The Doctrine of the Democrats

Source: The Law by Frederic Bastiat, 1850 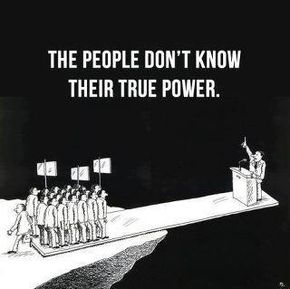 The strange phenomenon of our times - one which will probably astound our descendants - is the doctrine based on this triple hypothesis: the total inertness of mankind, the omnipotence of the law, and the infallibility of the legislator. These three ideas form the sacred symbol of those who proclaim themselves totally democratic. The advocates of this doctrine also profess to be social. So far as they are democratic, they place unlimited faith in mankind. But so far as they are social, they regard mankind as little better than mud. Let us examine this contrast in greater detail.

What is the attitude of the democrat when political rights are under discussion? How does he regard the people when a legislator is to be chosen? Ah, then it is claimed that the people have an instinctive wisdom; they are gifted with the finest perception; their will is always right; the general will cannot err; voting cannot be too universal.

When it is time to vote, apparently the voter is not to be asked for any guarantee of his wisdom. His will and capacity to choose wisely are taken for granted. Can the people be mistaken? Are we not living in an age of enlightenment? What! are the people always to be kept on leashes? Have they not won their rights by great effort and sacrifice? Have they not given ample proof of their intelligence and wisdom? Are they not adults? Are they not capable of judging for themselves? Do they not know what is best for themselves? Is there a class or a man who would be so bold as to set himself above the people, and judge and act for them? No, no, the people are and should be free. They desire to manage their own affairs, and they shall do so.

But when the legislator is finally elected - ah! then indeed does the tone of his speech undergo a radical change. The people are returned to passiveness, inertness, and unconsciousness; the legislator enters into omnipotence. Now it is for him to initiate, to direct, to propel, and to organize. Mankind has only to submit; the hour of despotism has struck. We now observe this fatal idea: The people who, during the election, were so wise, so moral, and so perfect, now have no tendencies whatever; or if they have any, they are tendencies that lead downward into degradation.

Let us establish an Areopagus to watch over the education of our youth and to promote national enlightenment, in order that it may purify every instance of corruption in the Republic and denounce ingratitude, selfishness, indifferent love of country, and idleness and negligence on the part of the citizens, that it may judge the first signs of corruption and of evil example, using moral penalties to correct violations of customs, even as criminals are punished by corporal penalties. Such action should be taken not only against that which conflicts with customs, but also against that which mocks them; not only against that which attacks them, but against that which weakens them; not only against that which violates the Constitution, but also against that which outrages public decency. The jurisdiction of this truly sacred tribunal should be effective with respect to education and enlightenment, but advisory only with regard to penalties and punishments. But its annals or registers containing its acts and deliberations, which will, in effect, record the ethical precepts and the actions of citizens, should be the public books of virtue and vice. These books would be consulted [for guidance] by the people in elections, by the magistrates in their decisions, and by the judges in rendering verdicts. Such an institution, chimerical as it may appear, is infinitely more feasible than others which certain ancient and modern legislators have established with less benefit to mankind.

Legislators! In the plan of a constitution that I most respectfully submit to your better wisdom, you will observe the spirit in which it was conceived. In proposing to you a division of citizens into active and passive groups,1 I have endeavored to promote the national prosperity by means of the two greatest levers of industry: work and knowledge. By activating these two powerful mainsprings of society, we can achieve the most difficult of accomplishments among men-that of making them honest and happy. By setting just and prudent restrictions upon the primary and electoral assemblies, we can put the first check on popular license, thereby avoiding the blind, clamorous conventions that have in all times placed the stamp of error on elections, an error that consequently carries over to the magistrates and in turn to the conduct of the government; for the initial act of election is the one by which a people creates either liberty or slavery.