Difference between revisions of "EOS"

EOS is a new Ethereum-like crypto-currency designed by Dan Larimer who also built Steem and BitShares which are both very successful blockchain projects that both have proven scalability. Unlike Ethereum, EOS allows free transactions and is aimed at full-stack application development with familiar development languages and tools, rather than focusing on contracts using specialised languages and tools. EOS is an attempt to combine best aspects of crypto-contracts, human contracts, and human dispute resolution whcih makes it the first Ricardian Contract blockchain.

Under EOSIO Dawn 3.0, the vast majority of the blockchain business logic has moved into a smart contract which can be dynamically updated by the community without a hard fork. A bare-bones EOSIO blockchain is now a single producer without any tokens, voting, or delegated proof-of-stake. The only thing implemented in the core blockchain code is the permission system which includes the ability to create accounts, deploy contracts, and enforce resource quotas. Everything that makes the blockchain Delegated Proof of Stake including the token, voting, staking, and resource allocation is now defined by the Web Assembly based system contract. 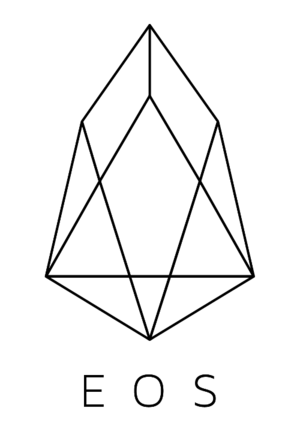 EOS is a new Ethereum-like crypto-currency designed by Dan Larimer who also built Steem and BitShares which are both very successful blockchain projects that both have proven scalability. Unlike Ethereum, EOS allows free transactions and is aimed at full-stack application development with familiar development languages and tools, rather than focusing on contracts using specialised languages and tools.

The network itself is not being launched by Larimer or his company Block.one, rather it has been left entirely up to the community to launch it and build applications on it. For the last year, there has been an ICO under way for EOS using the Ethereum network, then on June 1st snapshots were taken by a number of teams involved in EOS and validated together to arrive at a final single agreed upon snapshot which became the "genesis block" on the official EOS chain. There were a number of different contenders of EOS chains as well, but the one that the community at large has settled on is the one with the ID of aca376f206b8fc25a6ed44dbdc66547c36c6c33e3a119ffbeaef943642f0e906.

Now that we have an official chain, the next step is to vote for 21 "block producers" who will play a role similar to that of mining in the Bitcoin network. There are around 200 block producer candidates, and it's up to the community to vote for who they want to be managing the network. The strength of a vote is proportional to the amount of EOS you "put at stake" - to make a vote you do a special kind of transaction that locks the EOS away for 3 days. Since voting involves your private key, it's very important to do it securely - many block producers have forms on their websites where voting can be done, but I strongly discourage the practice of entering your private key into the browser since there can easily be malware running.

A single transaction can vote for up to 30 block producer candidates, and you can change your vote at any time effective immediately. This means that block producers have to stay committed to their goals and behave well all the time, or they can lose their position in the network instantly. The power of a vote slowly diminishes by half each year, so people are encouraged to keep an eye on what's going on and vote regularly. 15% of the tokens in the network (that's 150 million EOS) have to be used for voting before the network activates and becomes available for public use. The Crypto Lions block producer candidate from Ukraine have made a useful page here, where you can see how much EOS has been staked for voting so far and the current rankings of all the block producers.

There are two methods of voting I recommend, the first is the EOS voter desktop app by block producer candidate Team Greymass. This is much safer to enter your private EOS key into than the browser, and it's very easy to use - you can also select an option specifying to not save your key to disk which is even safer. But for those with big balances to protect, the secure offline voting tool by block producer candidate Tokenika from Poland, allows you to sign the transaction completely offline on a computer that has never even been on the internet, this is a more time-consuming method, but it's extremely secure.

But who to actually vote for? Well CryptoLions, Team Greymass and Tokenika mentioned just above are all good candidates ;-) You can look through the list of all candidates at random and find teams that share your values, or otherwise here is a good list of well thought out recommendations to get you started. Remember, if you find more good candidates, or any that you've already chosen turn out to be less than what you expected, you can update your vote at any time :-)

Update!!! The network has just reached the minimum votes required for activation! It happened very suddenly with whales stepping up at the last minute to place their votes, mainly accounts gm3tombuguge with 32 million EOS and ge3dkmbwgyge with 25 million (the 7th and 8th largest accounts in the genesis block) who voted only for EOS Canada. The next biggest whale who voted around the same time was account ha2tsmzqhege ranked 16th with 11.7 million EOS who voted for two Chinese block producers folowed by geztomjzhage ranked 27th with 3.1 million EOS who voted for Bitfinex and EosDAC.

The EOS blockchain has a constitution which is a binding contract among those users who sign it. The content of this constitution defines obligations among the users which cannot be entirely enforced by code and facilitates dispute resolution by establishing jurisdiction and choice of law along with other mutually accepted rules. Every transaction broadcast on the network must incorporate the hash of the constitution as part of the signature and thereby explicitly binds the signer to the contract. The constitution states that all users agree to settle disputes by arbitration. The constitution is currently an "interim" document that is intended to be replaced by one that is created through collaboration and ratification of the community.

REX is short for “Resource Exchange” and is a novel creation first officially proposed by Block.One on August 8, 2018. It is a marketplace created within the EOS blockchain that allows for the risk-free leasing of network resources (CPU & Network). REX was proposed at a time when EOS was experiencing a high degree of congestion which affected the ability for the average user to transact successfully on-chain. Just as important, large decentralized applications (dApps) were voicing concerns over the rising cost and increasing scarcity of resources required to run their dApp.