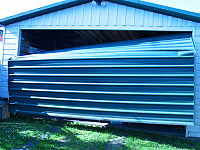 A small tornado hit the Waikato town of Cambridge at 3:00am in the morning. It had the intensity of an EF0 on the Enhanced Fujita Scale. 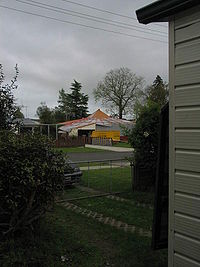 The tornado headed through town from the north and bounced through urban housing at times increasing in intensity to an EF1 damaging about 100 homes. I woke up as the tornado passed about two houses away, causing minor damage to our property. 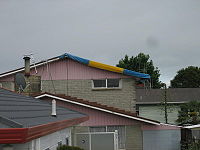 The garage door was sucked out and several items in the garden flew around. Three neighbours within 50 metres were not so lucky receiving extensive damage to their roofs. Fortunately in our street power lines were not pulled down, however other streets were not so lucky. Thunder storms caused water damage to properties where roofing had been removed. Ironically emergency services were holding an expo the same day and were kept busy with the cleanup. Weakness in New Zealands economy was evident as trades people such as glaziers went around door to door handing out business cards the next day.