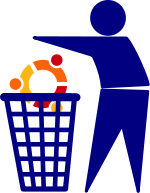 We've been using Debian for our server operating system of choice for over ten years now, but I've recently decided to change from Ubuntu to Debian for our workstations as well now since Ubuntu is increasingly becoming the "microsoft of the free software world" with pay software and services at every corner and compulsory spyware riddled throughout system.

I was very dissapointed with the change of the desktop environment to Unity as well which I really can't stand, but the spyware is a real show-stopper for me so it's time for a change. Some other choices I've looked into which look really good are Linux Mint which currently holds the number one position in popularity of Linux distributions, Mageia which is number two, and gNewSense which has the strongest libre-oriented focus.