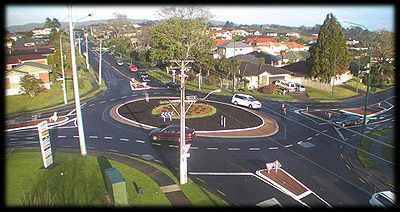 The C-Roundabout is a new type of multi-lane roundabout developed in New Zealand in 2005, originally as means of more safely catering for on-road cyclists. It was developed by Duncan Campbell and Ivan Jurisich of Traffic Engineering Solutions Ltd [1] as part of the New Zealand Transport Agency (NZTA) research programme [2] Media:Crbtaustroads2006.pdf, and was concurrently the topic for a thesis submitted for partial completion of a Masters degree (civil engineering) by myself.

Many cyclists find big multi-lane roundabouts daunting to ride around, and can also suffer much higher crash rates than at traffic signals[3]. Although multi-lane roundabouts are not necessarily death-traps for cyclists, they can be at the very least a deterrent to novice riders. The New Zealand government is trying to encourage more people take up cycling for both health and congestion-relief reasons, so this matter is of some concern.

Well designed roundabouts are a safer form of intersection control for vehicle drivers than traffic signals and should suffer far fewer injury crashes involving these users, particularly so for junctions with greater than three adjoining legs [4]. This is simply because much higher collision speeds are possible at traffic signals compared to a well designed roundabout. However, many city councils in New Zealand are more concerned with catering for pedestrians and cyclists and are instead installing traffic signals which does not necessarily align with the objective of reducing injury crashes on our roads. Other reasons may include: conventional multi-lane roundabouts can take up a lot of room so can be expensive to install; roundabouts are generally trickier things to design well; and traffic behaviour can be less predictable than at traffic signals. This is where the C-Roundabout fits in quite well - it can be built in a compact area (i.e. cheaper) and if designed with lower vehicle speeds in mind can be safer for both pedestrians as well as cyclists. This is achievable because it requires larger vehicles such as truck or buses to straddle traffic lanes, and car drivers are expected to discern that they are to keep clear of these vehicles (appropriate signage can assist).

Several C-Roundabouts have been successfully built in Waitakere City since 2008. A NZTA research project that reviewed their operation is currently being submitted for publication and hopefully should be published early 2012, and in May 2011 some of the findings were presented at the International Roundabout Conference in the United States [5] [6]. This review included evaluation of vehicle speeds and road user behaviour and collecting feedback from drivers, cyclists and pedestrians. In general a reasonably high proportion of car drivers do not like them because they squeeze you closer to vehicles in adjacent lanes, but cyclists and pedestrians certainly prefer the C-Roundabout because traffic speeds are lower and cyclists are better able to 'claim the lane'.

One example includes the Seymour Rd / Parrs Cross Rd intersection in Waitakere, a brief clip of its operation during a morning peak is shown at : [[7]].