Today I baked some bread with fillings...

Keep them in the oven without the heat on waiting for them to rise... 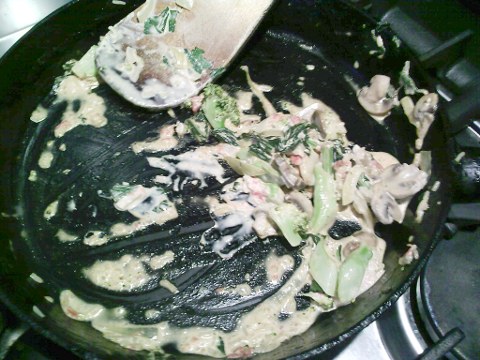 Today I cooked a potato pie. It's a pie that has potato pastry filled with vegetables. First I peeled and chopped some potatoes and started them boiling. Then with the aid of my trusty assistant I chopped some cabbage and grated some carrots. Also I finely chopped some olives and nuts (cashews, brazil nuts and almonds).

Next I fried the vegetables with a little oil starting with the carrot and nuts since they need longer to cook. Then after about 10 minutes I added the cabbage. There was a lot of cabbage, so half was added first and then after it had shrunk down, the rest was added. I also added a little salt, curry powder and cumin. When this was cooked I left it ready to be added to the pastry.

To make the pastry I first mashed the potatoes and blended them with some milk, butter, salt and flour. The idea is to add as much flour as possible while preserving the potato taste. When the consistency was smooth but firm enough to form the walls of the pie I put it into a greased pie dish lining the bottom and sides. Then I added the fried vegetable filling and put more potato pastry over the top.

Finally I put it into the oven at 250°C for about half an hour until it was golden brown on the top, and here's what it looked like!

Today I learned how to cook fritters. First I chopped up a small amount of onion and a full frying pan of finely chopped cabbage. The onion was fried in some oil for a few minutes and then the cabbage added. Also boiling in two other pots was some rice and potatoes chopped small.

I then cracked three eggs holding the yoke of each in the palm of my hand letting only the whites poor into a bowl. The yokes were kept in a cup for later. The whites were then whipped until the bowl could be held upside down without pooring out. The yokes were then put back and stirred in with a pinch of salt and two tablespoons of flour, the boiled potato and the fried onion/cabbage mix.

The mix was then added to the frying pan containing a small amount of oil, three fritters at a time, each about a few table-spoons of mixture. When the fritters are able to move freely on the pan, they're turned over for a minute or two then put onto a plate freeing the pan for the next three fritters.

Note: You can add any vegetables to the fritter mixture such as corgettes, carrots or scallopinis. Spices such as coriander seeds, basil or parsley are also a good addition to the mixture.

Today I made some hummus. First I soaked chickpeas overnight in water, then boiled them and blended them up with some water. Water was added until the consistency was right. Then some lemon, pepper, salt, garlic and a tablespoon of tahini was added and blended in.