Finding water on our land

From Organic Design wiki
Jump to:navigation, search
More posts by Nad: < Prev | Next >
Posted by Nad on 24 October 2021 at 08:58
This post has the following tags : Our second year on the land

Most of the water we use is for plants and washing clothes and dishes, and for these purposes the river water is fine. But we also need about 20L per week of drinking water and the river water would need to be boiled if we were to use that. But our neighbour Maneco has a spring on his land and is happy for us to fill our 20L bottles from it - and it's really awesome natural spring water! Ideally though we'd like to be more independent and we were talking about this with our other neighbour Ziza a few days ago. She said she knew a local guy who's a dowser and when we showed interest, she gave him a call and we arranged for him to come and check out the situation.

Well today he arrived, so we set off for Ziza's about 1pm as we'd arranged to meet at her place so they could catch up with her first. When we arrived at Ziza's, Rui's wife and friend were inside talking to Ziza and Rui was outside taking a look at the friends car which was having problems - turns out he's a mechanic too! Beth joked that maybe he could fix our car too :-)

After a coffee we came back to our place with Rui and his wife to start the dowsing process. We started close to our house and walk in a few line around the garden area, and soon enough found that we had water passing at the closest corner of the vege patch about 2.5 metres down! Beth asked if there was anywhere up the side of the hill too because we know Maneco has a second spring on his side of the same hill, and it turns out there's an underground river running at about 10 metres hight above our house. It's four metres deep though and there's probably a lot of rock to go through, so we'll probably need the council to drill that as only they have the machinery for it locally. So if that all works out then we could actually have running water here soon! We talked a bit about Dowsing and he tried to explain how to do it, but we couldn't feel anything in the stick at all. His wife said she'd tried a lot too and couldn't do it, it seems to work though and is used a lot throughout Brazil very successfully.

When we got back to the house he saw our Lada Niva and Beth explained that it wouldn't start because it's too cold. Just last week, Geremias (one of the guys who gave us a ride home a couple of weeks ago, and is also a mechanic) said that Alcohol's not so bad in the cold, but you need to mix about 30% petrol with the alcohol (we currently mix about 5%). But Rui asked for the keys to give it a go, and low and behold! He got it started straight away! And when we told him that was the first time it's started in over a month, he was shocked and said it must be working extremely well to start that easily in the cold after not running for so long!!

Beth asked how he did it and he told us a trick to getting alcohol cars started. Many of them have a small supplementary petrol tank that's used when it's cold to warm the critical parts of the engine up to help the alcohol ignite. There's a small button you press to release some of the petrol into the engine. We were told by the last owner and some other mechanics that you press this for a few seconds and then start the engine. But Rui said you should press it while you're starting, which works really well! So Beth's joke that maybe he could fix our car while he was here as well turned out to be exactly what happened! After they left, we put Nivinha straight to work and got the remaining wood and roofing panels which we'd left in the field a month ago when we last got a truck load of supplies delivered :-) 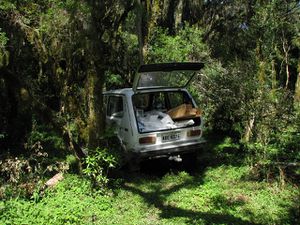