From Organic Design wiki
Jump to:navigation, search
More posts by Nad: < Prev | Next >
Posted by Nad on 28 June 2022 at 02:58
This post has the following tags : Our second year on the land

Out here in the wilderness the mice are relentless! there's no point trapping them and taking them away or even killing them, because within hours of their absence others quickly replace them. We've been having a lot of trouble with them over the last few weeks, perhaps because it's nesting time or something. Every night many of them are scuttling all over the house looking for any slightest hole they can gnaw away at to get in.

A few nights ago one of them finally made it into the ceiling. We tried putting a trap up there, but country mice seem to be smarter than city ones and they're able to remove the food from the trap carefully without setting it off. We quickly set about sealing up any holes in the ceiling that it would be able to enter the main living area through, but unfortunately we were too late! It managed to get out of the ceiling onto the top storage shelf, and when we started removing items from the shelf to reveal it and trap it, it made a huge two metre jump onto the kitchen bench and disappeared amongst all the bits and bobs. It took an hour or two, but we eventually managed to corner it and get it into a mouse-transportation jar.

We tried to seal everything up as best we could by nailing bits of wood around the suspicious looking parts of the exterior, but then last night we heard another one scampering around in the ceiling! We eventually discovered that they were getting into the capping and entering from in there. So today I went up there and pulled it all off to put concrete in all the holes, so that firstly they won't be able to get into the capping, and secondly if they did manage to get in there's no entrance into the ceiling from there. Here's a picture after I got started with the job. 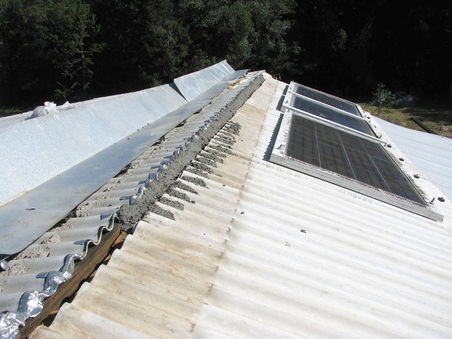 The lesson learned from all this is when you build a house in the forest, it has to be made without any holes at all, especially in the foundations or roof which often are left with some small holes such as under corrugations. It's best to seal any holes up with concrete during construction, because it's a major hassle doing it after everything's built! Concrete, metal or hard wood is best because the mice will eat through anything softer given enough time.