Our garden in Curitiba

We've now moved into a new flat in São Lourenço (Curitiba, Brazil), and have a small place to ourselves for a year which has some space for planting vegetables. The soil looks very bad as you can see from the first picture below, so the first step is to make it more fertile.

We had to quickly pull some weeds out and clear some space for some of the potted veges we'd started growing in the pensão that were starting to die. Unfortunately the overgrown weeds had become a home for a big fat frog which had to relocate :-(

(He's been back to visit a few times now and even came into the house a couple of times and rolled beer bottles down the path at night! we've named him "Gordo")

After about month our barren piece of ground is already looking a lot greener!

Our vege patch has enough mature vegetables in it now to provide us with complete meals - here's our first one :-)

Our chickpeas and a spring onion:

We'll be leaving to move down to our land in a couple of weeks, so we're collecting seeds, cuttings and seedlings to take with us to start our new garden.

We had a great source of spinach on the path, until the landlord hired an old guy with a weed-eater to kill them all :-( but luckily Beth saw some small seeds from the plant had sprouted in the neighbours ground, so she quickly grabbed some of them while I captured the evidence on video!

Here's a photo of our spinach planted from the stolen cuttings after a couple of months :-) 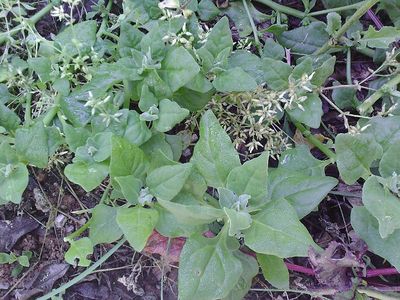 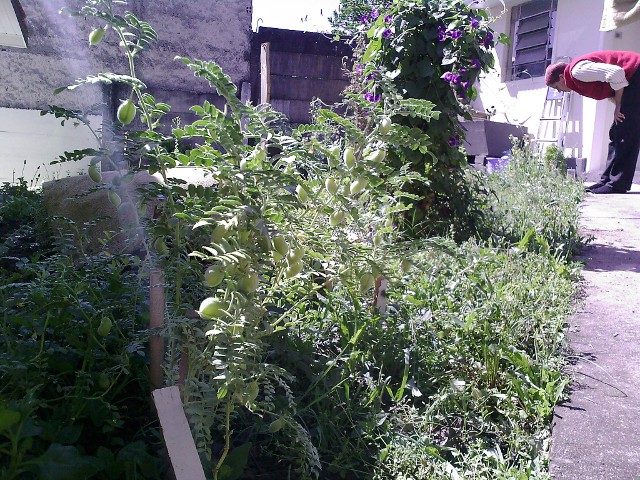