Pão de queijo are a variety of small, baked, cheese-flavored rolls, a popular snack and breakfast food in Brazil. Its origin is uncertain; it is speculated that the recipe has existed since the eighteenth century in Minas Gerais (Brazil), but it became popular throughout the country after the 1950s. It is also widely eaten in northern Argentina. In countries where the snack is popular, it is inexpensive and often sold from street-side stands by vendors carrying a heat-preserving container. In Brazil, it is very commonly found in groceries, supermarkets and bakeries, industrialised and/or freshly made.

1) Put four cups of the manioc starch into a large mixing bowl. 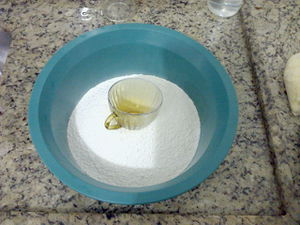 2) Put two cups of milk and one cup of oil into a pot and heat on the stove top. Add a teaspoon of salt as well if the cheese you're using isn't already salty. 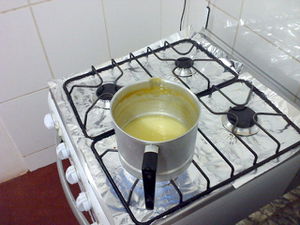 3) When it's very hot, add it to the starch in the mixing bowl. It doesn't need to be completely boiling, just very hot will do. Boiling is fine too but it will take longer to cool down in the next step.

This is the most important step. Add the liquid slowly to ensure that all the starch gets mixed in with the milk and oil. Any starch that doesn't have oil on it won't cook properly.

4) When all mixed, let it cool down. This is so that the eggs won't cook at all while they're mixed in

5) Add one egg at a time and mix until it's a uniform texture and quite liquid, but still viscous enough to hold together between your fingers when you spread them apart. We used four eggs here, but depending on the properties of your starch and milk you may need an egg more or less to get the desired effect.

6) Add the cheese which must be dry and grated. If you use a strong cheese like Parmisan, one cup will do, but if you're using something mild then two cups would be best. Obviously the kind of cheese you use will greatly effect the character of the final pão de queijo and depends on personal taste. Whatever you use though, it must be dry and finely grated. Mix until it's all uniform with small air bubbles forming. You can't see the bubbles, but you can hear and feel them as you mix it.

TIP: You may like to make more mixture than you need and then put the surplus aside at this point to be frozen for later. That way you can quickly whip up nice freshly cooked pao de queijos when guests come over :-) The mixture will need a few hours to unfreeze tho so it doesn't work for the spontaneous kind of friends!

UNTESTED TIP: for a gourmet pão de queijo, add a tablespoon of a nice blue cheese like a Gorgonzola or blue Stilton.

7) Next get a pan and oil the surface as well as your hands, then roll the mixture into balls and position them on the pan keeping them at least an inch apart. As you roll the balls you'll need to keep your hands nicely greased otherwise the mixture will start sticking and it can get pretty messy!

8) Preheat the oven for about ten minutes at about 280°C, then put the tray in the oven until they get slightly brown which could be twenty minutes or could be an hour depending on the oven. 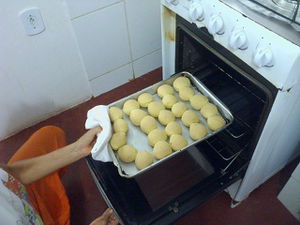 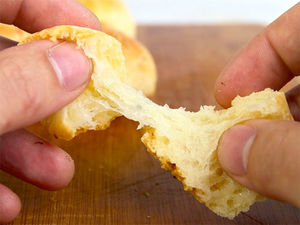