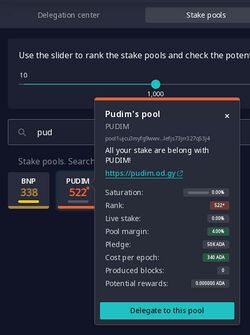 Pudim has fired all her old staff for being too old and lazy, and has hired a motivated young developer to get her up and running on the main net! Pudim became officially available as a pool option today, but recommends her fans wait until further testing has been done before delegating their stake to her.

The rewards for the ITN ended at epoch 189, but the Cardano community is so happy with how well the network has performed that they're going to keep it running as a rapid prototyping network for the ecosystem. The ability has been added in Jormungandr version 0.9 for pool operators to cast a vote to decide whether the ITN rewards should carry on for another month. Pudim has cast her vote today in agreement with this idea :-)

Apr 20: The sun sets on a great champion

The sun has finally set on a great champion today. After winning over 80% of her first 50 battles, Pudim has announced today, after fighting her 80th battle, that it's time for her to hang up her gloves and make way for some of the younger fitter pools in the ring. Pudim would like to assure her stakeholders that all is well and she will continue to be active in the ADA pool community, but she will be focusing on consistent reward generation rather than attempting to climb back up to the number one spot in the ring.

Pudim's been running for just over three months now, and just created her 1000th block in the late evening of April 4th! Her performance has stabilised and been very consistent over the last month or so producing more than 93% of her assigned blocks over the last two weeks. This means that she's been getting involved in far fewer unofficial street fights (height battles). However, when it comes to official fights in the ring, there's no question that she's maintained her status as a heavyweight champion - she's now fought 51 slot battles and won 42 of them, and after all this time still ranks first out of all the veteran fighters who have been in the ring at least 20 times. 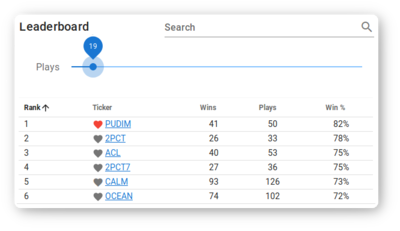 In the Cardano system it's possible for more than one pool to be elected as the leader of each slot, meaning that both have been granted the right to create a block for the same slot. When this happens a so-called "slot battle" is fought out, because a slot can't have more than one block in it. The pool which is best connected and able to produce the block fastest wins out and has their block selected by the network as the official next block in the chain.

Pudim has been extremely good at winning slot battles! The PoolTool site keeps a record of all the slot battles in a leaderboard, and Pudim's been in the No1 position for over a week which started after she had achieved six consecutive wins, and finishing today when she finally lost to 1PCT9 after 15 consecutive wins - two more than any other pool on the network has achieved! It's actually a bit of a mystery because Pudim is running on only a single average sized VPS server, but she's been up against the biggest heavyweights in the network running on clusters of dedicated servers!

PUDIM's set a new personal Daedalus raking record today of 17 and has created over 300 blocks 🎉 🎉 🎉, we're not sure of her intentions, but some believe she might be gearing up to try for the top ten! She's been running very stably since we decided to move her over to Michael Fazio's v0.8.9-stable fork. It fixes quite a few issues including the problem of the CPU usage creeping up over time, so now there's no need for regular restarts and the node has been running for over three days continuously now. Here's a comparison of the 24hr CPU usage chart on the new stable fork and the prior to mainline versions. 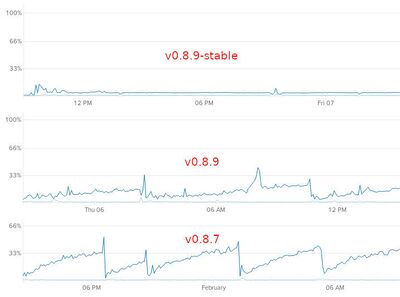 Feb 4: PUDIM's moved again, but just down the road this time

When we moved from Linode to Digital Ocean we moved to a server of equivalent price which is only $20 per month. But one problem with the new server was that the virtual CPU allocation was not dedicated, meaning that sometimes it did not have access to full threads resulting in periods of high CPU usage and potential lost blocks. PUDIM's stake has started going up again, it's now around 45M ADA so she's needing to process blocks much more often, and so we thought it best to move to a VPS plan with dedicated vCPU access.

The move went smoothly, especially since we use a floating IP so that we can change to new hardware without changing IP address as long as we stick to the same data center. The new CPU is not only dedicated but also more powerful! We've gone from Xeon Gold 6140's @ 2.3GHz to Xeon E5-2697A v4's @ 2.60GHz and our cache size has gone from 25MB to 40MB. This new VPS is double the price though at $40 per month.

Feb 1: A great start to the month with a new ranking record!

Pudim's set a new record for herself with a Daedalus ranking of 25! after producing all 7 of her assigned blocks for epoch 49! She also produced her 200th block today! Oba! 🎉

Jan 27: Pudim's been running for a full month now

Pudim's been running for a whole month now! She's had her ups and downs, but over all she's done a great job, and has been running very smoothly since the move to Digital Ocean. She's created a total of 173 blocks and has even broken her own Daedalus ranking record today getting all the way up to 38!

That's right! After moving to the new server and adding the new optimisations, she's been running smoothly for over a week now, and has today made a big jump from rank 113 in the Daedalus wallet all the way up to 75! Oba 🎉

After another bad epoch due to low stakes and an absent-minded admin forgetting to update the time-servers from Singapore to Germany, Pudim's back on track. She's been extremely stable and she produced all six blocks assigned to her for epoch 37 🎉 🎉 🎉

Jan 17: Pudim moves to a new server in a desperate attempt to regain staker confidence!

After attempting various configuration optimisations such as Chris Graffagnino's set up procedure but still experiencing rejected blocks, Pudim's admin staff noticed that one of the server's CPUs was almost constantly maxed-out even with a low max_connections setting of 256. Nothing seemed to lower the CPU usage, so eventually it was decided to try a different VPS provider and a shift to Digital Ocean was undertaken. We also decided to change country too just in case Singapore was giving us trouble as well, so the new server's in Germany. After a few of hours of operation, the results look very promising with the CPU averaging out consistently to around 20%. The image on the left is the CPU monitor from the server in Singapore, on the right is the new server in Germany. 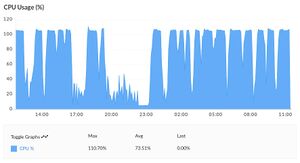 Jan 16: Pudim's performance has degraded so much that her own staff have walked out with their stake :-(

Pudim's performance has been steadily decreasing for a week or so, and people have been withdrawing their stake with a total decrease from 43M to 23M being seen. Pudim's performance was so terrible in epoch 33, with only a single block produced out of 14 scheduled, that even her own staff left in utter disgust!

Pudim's ranking in the Daedalus wallet went from 106 to 95 after she produced block 71258 for slot 3718 of epoch 22, and then shortly after a friend noticed it had dropped even further to 88! 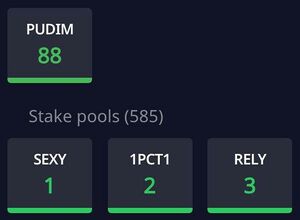 Congratulations PUDIM! She produced her first block in the early morning of December 27th 2019 🎉 🎉 🎉

All blocks produced by PUDIM can be seen in the Shelly Explorer here.