SOGo is fully supported and a trusted, open source groupware server with a focus on scalability and open standards. SOGo is released under the GNU GPL/LGPL v2 and above.

SOGo provides a rich AJAX-based Web interface and supports multiple native clients through the use of standard protocols such as CalDAV, CardDAV and GroupDAV.

SOGo is the missing component of your infrastructure; it sits in the middle of your servers to offer your users an uniform and complete interface to access their information. It has been deployed in production environments where thousands of users are involved. The following diagram demonstrates the SOGo architecture. 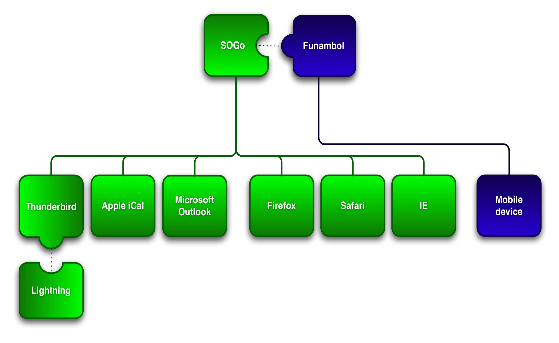 Standard protocols such as CalDAV, CardDAV, GroupDAV, HTTP, IMAP and SMTP are used to communicate with the SOGo platform or its sub-components. Mobile devices supporting the SyncML standard use the Funambol middleware to synchronize information.

They have installation packages available for the most popular Linux flavours including Debian, Ubuntu and RedHat. In installed the Ubuntu version for Lucid according to their Ubuntu installation guide.

This all went without a hitch, about 40MB of packages were downloaded and installed and then the sogod daemon started is listening on port 20000, but a login causes it to fail, because no configuration has been done yet.