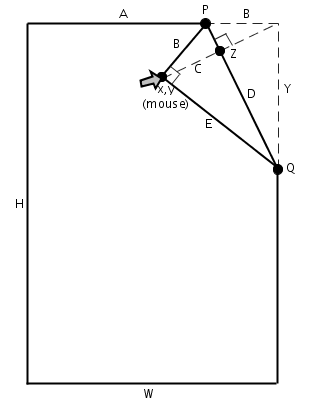 Here's the diffs showing the changes for flipping the page-fold horizontally or vertically (middle best handled after these two)...

Notice that the differences can all be expressed as simple changes of sign of an item in some of the expressions. Tx is -1 or +1, Ty is -1, 0 or +1. Tx and Ty use those values so that they can be used as multipliers to either change the sign of what they multiplied with (if its -1) or leave it unchanged if its +1.

The text can't be rotated while it's using device-rendering for fonts. They must be embedded, but the ming-format fonts have to be embedded from swf.php (and could later be incorporated into the associated XML articles like PNG's etc).

The current problem which I'll check out a bit more soon is that at a certain point moving outside the top-right of the page causes a rendering problem, it appears as a large triagular page where it should actually exit without folding at all in those scenarios. Here's a table showing the values of points P,Q,R and co-ordinates x,y and dx,dy for three cases of movement near the problem area. The first column is the working case, the second is the triangle problem which has its left most point in the books top-center, and the last column is the triangle with left point far off the left side.

The animation motion is based on a simple gravitational attractor where the target mass is high and its position fixed. The point in motion exhibits a decreasing mass so that it doesn't have any tendency to orbit the target. It is being tested and refined in e-book/attractor.as.