Try this if you have a reasonably up to date db:

Hashes from forks remain in storage

One person in the channel asked if we could see the block he created, I checked the hash 30c519 and it existed, others couldn't see it. I extracted his pool ID from the block data and then listed all the blocks created in that epoch by the pool, and sure enough that 30c519 didn't show up:

This is interesting as it shows that a node continues to have knowledge of hashes even after that are discarded from the chain after a fork is resolved. What's more interesting is that even after a node restart, 30c519 was still queryable which means that their held in the storage. This means that everyone's storage is unique and holds information about the forks it's experienced, and also that storage can be slimmed down a lot.

Michael Fazio found an interesting bug in Poldercast which he raised in issue#15 whereby peers are not connecting to their nearest neighbours but rather much more likely to connect to those with IDs starting with more zeros. It then turns out that the 1PCT pools seemed to know about this and took advantage of it by taking all the 00...00131313xxxx IDs for their nodes, which you can see many of here!

Michael Fazio has addressed some bugs that aim to keep the cpu usage down among other things and released these changes in his own fork of Jormungandr.

After trying it out for a while I found that the CPU usage is definitely way better and the node should no longer need regular restarts. I've had very bad luck minting blocks though, by losing competitive forks and being on adversarial forks during my leader slot. This might just be bad luck so I'll leave it running for a few epoch's to see. 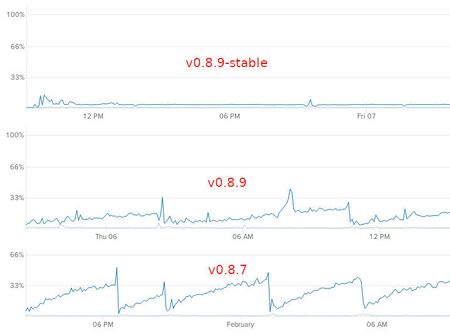