The art of tight fences

From Organic Design
Jump to:navigation, search
More posts by Nad: < Prev | Next >
Posted by Nad on 27 September 2020 at 19:12
This post has the following tags : Our forth year on the land

Out in the country you need to be able to make a good tight fence - it's similar to how people who like camping need to know how to make a good fire. After the great cow attack of 2016 I started making a secondary fence around the area where our planting operation is situated along the northern border to the land. Beth wanted this fence to be a really high quality tight five wire fence. So we bought 1500m of wire and I got started with the western side which is a short 50m stretch.

I put the master posts (the ones on the end that need to bare the full force of wires on only one side, or on uneven angles) about half a metre deep into the ground and hammered the dirt in around the post with the sledge hammer.

But when it came time to tighten up the wires with the new wire-tightening tool we bought last month the problems began. The master posts didn't remain vertical as the force of even one wire being tightened up was easily able to move the posts in their holes.

So re-bored the holes, put the masters in again, and this time tried puttint another 8x8cm eucalyptus post at 45° sledge-hammered in to the ground at one end and lodged into a groove cut into the master at the other end.

This time I was able to tighten all the wires, but after I tightened the lowest one, the top one was loose again, so I tightened that one up some more, but the force then became too much again and the 45 was pushed further into the ground allowing the master to lean again!

So I re-bored the hole again! This time I hammered a eucalyptus peg 30cm into the ground with a groove cut into it to prevent the 45 from moving. This worked a lot better, but when I started to really tighten the wires up a lot, the forces caused the 45 to lift the master out of the ground as shown in the photo below. The purple arrow shows the direction of the force the wire tightening caused due to the 45. 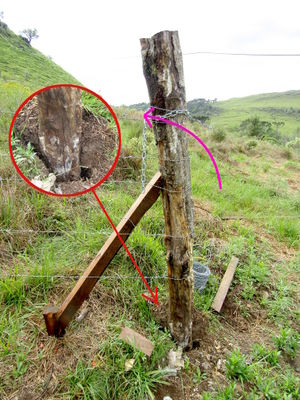 After this I decided I'd better do some research. First I looked around at the other really tight fences and I found that there's a complicated looking configuration that all the good fences have in common. I figured out how it distributed the forces, and I asked the neighbour Devalso about how to do it properly too. He said that this configuration is called a Contra Mestre (Counter Master) and it's much stronger than using a 45° brace. He also said that the master posts go a full metre into the ground and have their hole filled with stones that are hammered down using a heavy iron pole with a thick flat plate on the end. Here's a picture of a contra mestre. 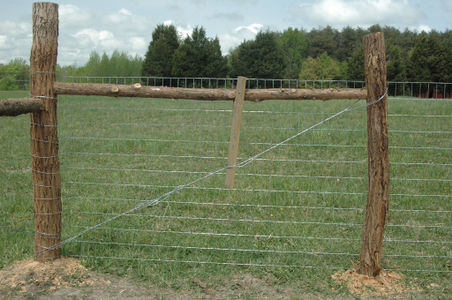 In this photo the fat pole on the left is the master, and the smaller pole on the right is the counter master (usually another fat master is used here too, but it's considered to be over-kill). The horizontal brace connects the two so that as the tight wires pull the top of the master toward the right, the force is transferred to the counter master which also tries to move toward the right. But the counter master can't move that way because its top is connected by very strong tight wire to the bottom of the master. This wire is at 45° and plays a similar role to a 45° brace but is in reverse - it resists a pulling force instead of a pushing force. This is superior because the forces are mainly distributed in a horizontal direction with only very little upward force on the master.

Devalso's going to come and show me the correct process for making this configuration next week, and in return I'm going to help him design a house for his sheep because he hasn't done any building before, but I'm quite comfortable in that area now after building two small houses and a garage :-)