The tarantula in the well

From Organic Design
Jump to:navigation, search
More posts by Nad: < Prev | Next >
Posted by Nad on 30 October 2015 at 21:21
This post has the following tags : Our third year on the land

I was just doing my emails today when I noticed a movement in the corner of my eye, I thought it would probably just be our flatmate Fattie collecting stuff for his new apartment, but it wasn't - it was a huge tarantula! It came from under the house and made its way over to the edge of the vegie patch. She's about 25cm long with her legs stretched out! I got a photo and then went back to my email. Then a couple of hours later it was time to get some water from the well, so I lifted the lid off, and guess who's sitting in there! We carried on collecting out water keeping a close eye on her (actually I don't think they're poisonous or anything), but then she decided it was too much activity for her and she left for the swamp :-) 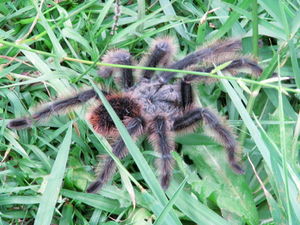 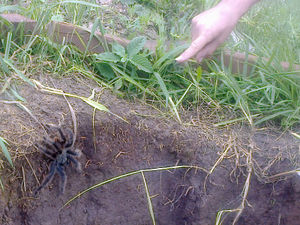 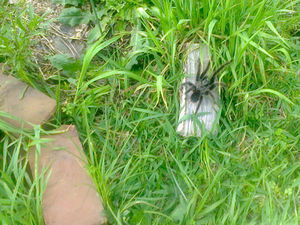