Wasps on the house

From Organic Design wiki
Jump to:navigation, search
More posts by Nad: < Prev | Next >
Posted by Nad on 12 June 2021 at 16:10
This post has the following tags : Our second year on the land

Now that it's summer the insect population has really sky rocketed, we painted the whole house with burned oil which seems to have deterred the worst problem insects such as termites, but there's still a lot of interest from wasps. We have at least three different kinds around the house, the first find existing holes and then pad the inside with leaves to make their nest, the second make the typical paper-like nests that hang on the walls and under eves, and the third kind are Mud Dauber wasps. None of these types of wasps are aggressive and don't sting people even when they fear their nests are in danger.

The Mud Dauber wasps are really amazing, they create nests out of clay made of a series of chambers with an egg in each one. They then find spiders and paralyse them with their sting and put a spider in each chamber so the new wasp has food when it hatches. The first time I saw a nest on the side of the house I thought I had better remove it as I didn't know what kind of wasp it was it was and whether the larvae might eat the wood. When the nest fell on the ground I was shocked to see it filled with spiders! I looked on the net and soon found out what was going on. More have been constructed now, but since I now know they're harmless I've just let them be. 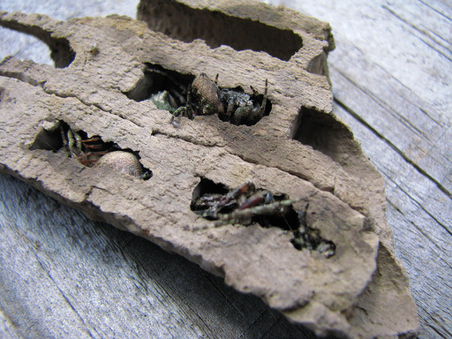