From Organic Design wiki
Jump to:navigation, search
More posts by Nad: < Prev | Next >
Posted by Nad on 13 June 2021 at 00:54
This post has the following tags : Our third year on the land 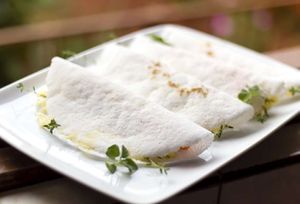 When we were at Arca Verde we noticed that they were making Tapioca a different way than us, they used a more course sieve and made them really thick. We asked them how they did it because ours don't work if we try to make them thick, we have to make them thin and they're really difficult to get the water content exactly right so they don't break.

It turns turns out there's two different types of Manioc starch, sweet and sour. We've been using sweet, but they use sour, and that makes all the difference. The sour has a sort of cheesie smell when it's raw, but they both taste pretty much the same after you cook them. But the sour starch is a very different consistency and is much easier to work with.

So now we're having Tapioca as part of our meals almost every day instead of bread since it's so easy! And we also add some corn flour too to make it a bit more nutritious :-)