A little can go a long way

From Organic Design
Jump to:navigation, search
More posts by Nad: < Prev | Next >
Posted by Nad on 25 January 2021 at 16:17
This post has the following tags : Our third year on the land

After we arrived at the land this time, we didn't bring much food, we planned to go shopping after a couple of weeks. But after two weeks we didn't want to interrupt our meditation practice by going for a complicated busy trip to Canela so we decided to put it off for another week even though it would mean we'd have to put up with a pretty bland diet.

But after another week we'd found that it wasn't so bad - there were always various little things available in the vege patch that made the food a little less boring. Now we've been here five weeks and we're still doing fine! We've found that the vege patch works both ways - not only does it have to slowly improve so that it can produce more, we have to learn more about what it has to offer! For example, Beth discovered that Kumara and pumpkin leaves are edible and high in vitamins and minerals. The pumpkin leaves are a bit too rough to eat raw, but are good when cooked and added to soup or stir fry. The Kumara leaves have a really nice flavour and can even be added raw to salads. 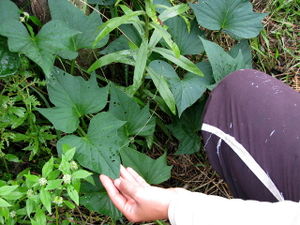 The vege patch is producing a lot of other things in very small quantities too such as courgettes, sweetcorn, capsicums, onions and garlic. Even though it's a very small amount, it goes a long way when you don't have a lot of variety, but you can add a small but of capsicum or a few cherry tomatoes to a meal - and although the quantity is small, there's always something there :-) 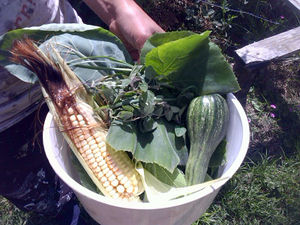 There are always many herbs in the garden for adding to meals or having in tea, and the lime tree leaves make a good tea even though it's not bearing any fruit yet. We even had watermelon last week and yesterday, and the forest has been providing some blackberries :-) 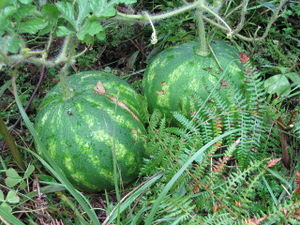 It looks like in a couple of years we'll have the opposite problem - we'll always have an overload of fresh fruit and vegetables, but will have to ration our rice and other dry goods since we'll probably only be going shopping two or three times per year!