From Organic Design wiki
Jump to:navigation, search
More posts by Nad: < Prev | Next >
Posted by Nad on 27 June 2022 at 23:10
This post has the following tags : Our second year on the land 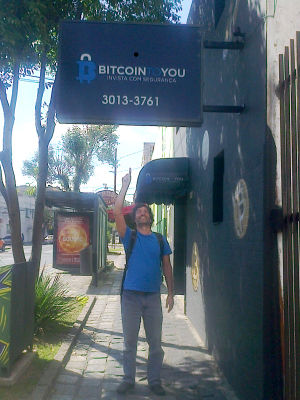 Today we went to the BitcoinToYou store in Curitiba to sell some Bitcoins that I had bought on the BitNZ exchange site yesterday. By buying the bitcoins on an exchange which is in the same country as your bank account, you don't have to pay any fees to transfer the money into the exchange. Bitcoin's finally starting to take off here in Brazil which is really good news :-)

This is a way for me to transfer funds from my NZ bank account into Brazilian Reals, but without having to be robbed by the banks in the process! In fact the price of Bitcoin in Brazil is a little higher than the international price since it's still very new here, so I actually made about R$80 in the process. If I had used an ATM to do this I would have lost about 5% on the currency exchange, and then had another R$12 cash advance fee added on top of that, which means this simple operation of transferring my own money would have cost me around R$100!!!

Bitcoin allows people to transact with one another independently without needing to trust the banking system which deserves no trust at all since it engages in secrecy, extortion and fraud as an integral part of its actual systemic core.