From Organic Design wiki
Jump to:navigation, search
More posts by Nad: < Prev | Next >
Posted by Nad on 16 February 2016 at 19:53
This post has the following tags : Our forth year on the land

The concrete has only been drying for four days, but we figured as long as were careful it should be ok! So we cut three 2.7m pieces of 5x12.5 (eucalyptus comes in 5.4m lengths instead of the usual 2.7m) and drilled the holes to bolt them on. Even though I made a guide (I drilled a hole through a thick piece of wood with the drill press) to try and ensure the holes were vertical, it wasn't very accurate because the wood isn't cut very well - not only is it really bent, but it's not very square either! We had to stop early though because it started raining during our picnic break! - the house was already able to shelter us from the rain though by putting a few roofing panels over one end of the foundation :-)

We took the generator with us to the work area in a wheelbarrow so we can use power tools for cutting and drilling, but it's only powerful enough to run a jig-saw not a circular saw (although we have to test that as a lot of people think that it should run one no problem). Unfortunately the jig-saw isn't strong enough to cut the thick pieces of eucalyptus, so we have to use the slightly less accurate chain-saw for those cuts! 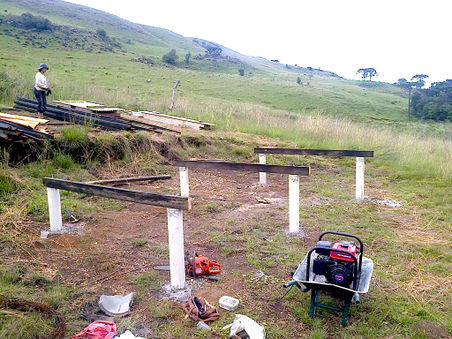 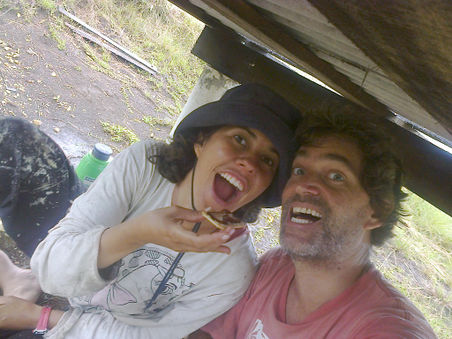