From Organic Design wiki
Jump to:navigation, search
More posts by Nad: < Prev | Next >
Posted by Nad on 12 February 2016 at 21:57
This post has the following tags : Our forth year on the land

We completed the foundations poles today, our third day back at the land. We wanted to get these done really early since we have to leave them for a week so the concrete is hard enough before we start putting heavy wood on top of them and hammering it. We made six foundations poles using PVC pipe filled with concrete as shown in the first image below.

Unfortunately the south-east (closest to Vladimirs place) and the north-west poles have no reinforcing - because we completely forgot about it! And the middle pipe on the south side goes all the way to the bottom of the hole, but apart from those problems all went well. We used 75Kg of cement, 150kg of sand and an extra 50kg of large stones. The cement is pretty bad quality as it's a couple of years old, and the sand too is from the river containing a fair bit of mud, so this concrete wouldn't be suitable for structure, but hopefully it'll be fine for foundations where the force is almost all downwards and it's contained within the PVC pipe to prevent it from bending if any cracks were to form in it.

Here's a picture of the completed foundation pipes and one of Beth clearing a path through the overgrown bracken from the newly delivered materials to the work area. If you click on the picture to get a bigger view you can just make out the wood and the new power pole in the distance at the end of the cleared path. 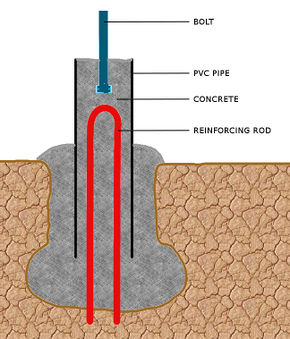 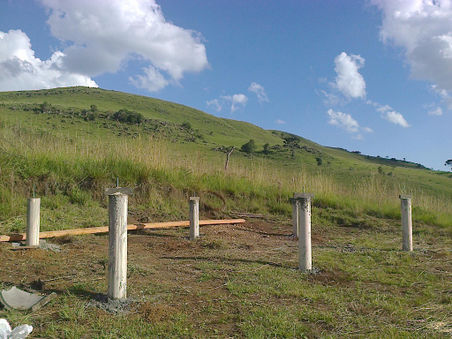 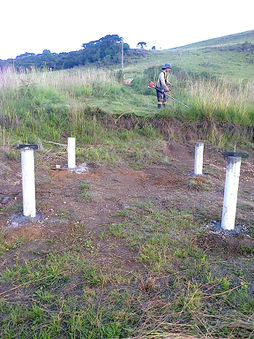