From Organic Design wiki
Jump to:navigation, search
More posts by Nad: < Prev | Next >
Posted by Nad on 13 June 2021 at 00:12
This post has the following tags : Our second year on the land 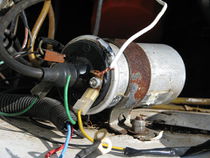 We talked to one of the neighbours who said that it was the ignition barrel needing to be replaced and that a Fiat one should would ok. Beth sent me to get the replacement from a shop on the main road when we were in Canela with her parents, but I miss-heard the instructions and went to our 4x4 mechanic Fernando instead. Luckily he was really helpful and even though he didn't have the right part, he explained that I could temporarily fix the problem by attaching a wire from the positive of the battery to the positive of the coil and remove it when we want the engine to stop. This worked very well and we were able to get Nivinha out of the forest back home :-) This was a real breakthrough for me with my Portuguese learning too because this was quite a complicated conversation and I was able to successfully explain the problem in detail and answer questions about the symptoms and then understand what he said I should do.

Since I have all the manuals with the wiring diagram for the car I was able to then work out what exact connections were failing in the ignition barrel. To fix the problem properly, I first removed the ignition barrel (this short video shows how to do that). The main catch is that the key must be in the ignition and turned to the first clockwise position before it can be removed, also there's a small catch that has to be depressed by poking a screwdriver into the hole (a little above the left hand mounting screw on the barrel). I then opened the barrel by removing the metal ring from the end with the contacts. I found that there was some bad corrosion on one of the copper plates causing it to lift off from the contact. I filed off the corrosion and also added some solder to the contact and the plate since the copper was also very thin and cracked. I then tested the connection with a multimeter and saw that the problem had been solved, so I put it all back together and reinstalled it into the car!