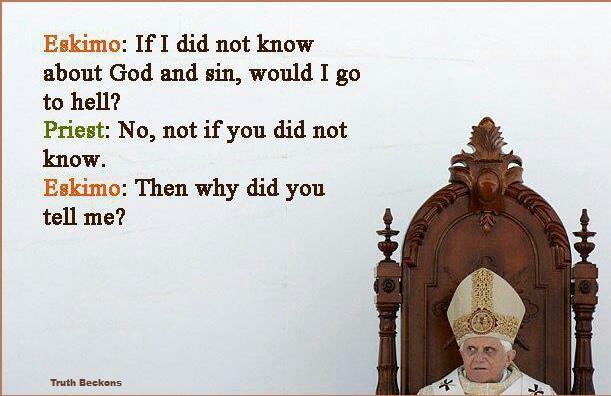 This is a question I've had about the Christian view for many years, and I've talked to a few different Christians about it. First I'll introduce our hypothetical character, Josephine.

Josephine lives with her people on an island where they believe in the mighty grasshopper god. All the people there are pretty good and there's no violence and only minor stresses here and there. Josephine is really good - she helps other where ever she can, and has never in her life done any wrong greater than killing bugs by accidentally stepping on them.

Over the years a number of Christian missionaries come over and tell the people the words of God and of the necessity for the people to believe in Jesus since he died for our sins. Each time the missionaries successfully convert a few of the people, and a church is erected on the island. Josephine listens to the missionaries and makes tea for them and is happy for them to visit and discuss these things, but at the end of the day she decides that she still believes in the mighty grasshopper and doesn't believe Jesus is the son if God (because he wasn't a grasshopper for one thing). She doesn't mind what other people on the island think and everything carries on just fine, she even helps out with church affairs and everyone on the island remains happy. Then one day when Josephine is old she passes away peacefully in her bed.

So the big question is: what happens to Josephine after she dies?

I'm not a Christian, I find it to be a childish and irrational belief system that's much akin to a meme-virus afflicting the planet. But for those who want to understand the pseudo-logic of where they're coming from with this crazy believe-or-burn-for-eternity perspective, the Bible in 11 (minutes) explains it all very well.

An answer would be good, because it's the difference between whether or not there are millions of good people being kept in extreme torcherous pain for eternity. If God does indeed do this, then I think it would be very important for all Christians to pray to him and ask him to please forgive the good non believers and stop torchering them. And in fact basically to just stop all the torchering, it's just not right to be causing people pain, even bad people like rapists and murderers. --Nad 21:04, 28 Feb 2007 (NZST)

The good people you reckon. I thought the only good person ever was Jesus. And of course true reconciliation between any two parties (when one side has done wrong to the other) comes from repentance on one side and forgiveness on the other - forgiveness alone cannot achieve that pinnacle. And I suppose the absolute reconciliation is heaven itself. Anything else is kind of, well, a little hot and steamy. But I'll see what I can dig up. It does seem an obvious question that I should be well versed on if I am ever going to help save the world. --Duncan

When I say "good" people, I mean good, not perfect. Our hypothetical good person, Josephine, has only ever done minor wrongs, and even those not on purpose (apart from her belief in the grasshopper god of her people) - so in my opinion it's not just judgment to commit her to eternal pain, but absolute evil! --Nad 21:04, 28 Feb 2007 (NZST)

interesting topic...I tend to think of heaven and hell being the same place, and that my reaction to it (it being God, Love, the Universe, whatever IT/ I-AM, BEING-NESS is) makes it what it "is". god=love, so i don't see how he could get off on tormenting his creation. that is not my picture of a loving god. for a more learned Christian opinion, i refer the reader to cs lewis's Great Divorce, which doesn't really address what they are like physically, but rather what it means to be in Hell or in Heaven. This opinion/belief does not find favor with the Baptist fire-and-brimstone background I grew up with, but fits in well historically with my current eastern/ancient Christian beliefs that I am studying and trying to embrace. --Phalseid 23:33, 28 Feb 2007 (NZST)

In your eastern/Christian view, how is Jesus related to God/source? is he one with God through being fully self-realised/enlightened? - but therefore also implying that others like Buddha are equally as much a son of God as he is? and what are the consequences of ones disbelief in Him? and does it mean during and/or after life? --Nad 23:46, 28 Feb 2007 (NZST)

a) i would say they are identical. b) AFAIK that would be considered heretical in the orthodox context, as Christ is considered to be uncreated. c)AFAIK, the orthodox position would be that we are all sons of god that can attain (yea, strive for) perfection via (theosis). orthodox Christianity is very non-judgmental in contrast to the "Christianity" i grew up with; it would not espouse to know anything about the Buddha, nor would I (they) pass judgment on anyone for their disbelief/ignorance of "Jesus". The focus given to me by my spiritual father is to pray God to have mercy on me as both an individual and as a corporate entity, and to focus on the present, not the past or future. d) the lack of perfection is the result of disbelief, i would think, and e), i would say both this and the next life, as sin is regarded as communal (corporeal) and not just individual in orthodox Christianity. --Phalseid 00:11, 1 Mar 2007 (NZST)

the movie what dreams may come tends to enforce the belief that we create our own personal hell by disbelief... --Phalseid 23:38, 28 Feb 2007 (NZST)

Kal Nirinjan/Satan/666 is the "ruler" of the physical layers of the universal system, attributed to being negative or "evil" due to being the personification of karma, or manager of suffering and judgement (Judgement being the assessment of a units performance in terms of the primary objective - maximum peace and harmony for all inhabitants - is based on a units patterns of action and the affect on the whole of widespread usage of that pattern). It is often said that suffering is the lack of love, but in actuality suffering comes from the deeper layers being obscured (information limited sub-domains), and so love is the default state exhibited by all the higher layers (which actually operate mechanistically) and suffering is the lack of love that comes from operating out of accord with the mechanism (having "free will") due to being information-limited (having "forgotten" the source).