May is ladybug season, we have hundreds of them all over the house and on many plants. They're really good because they keep the pests under control. We have at least three different kinds, the traditional red ones with black spots, "Brazilian ladybugs" which are green with yellow spots

The weakest plants were the kumara, basil, lettuce, tomatoes, spinach, beetroot and pumpkin which all died after a few days of frost. Carrot, kale, brokerly and peas survived but only just. Radish, parsley, rosemary and spring onion were strongest and didn't have any problem with the frost.

The cows got in to the vegetable garden in 2013 but we found that they don't seem to like any of our vegetables at all and didn't harm anything!

Garlic is very resistant to frost and it's a good time to plant them - their worst enemy is us because we stepped on them all :-(

Pinhão are very abundant in May but start in April. We learned how to collect them from the trees when Candido, his wife Celia and some of their friends came to visit this month in 2013, but we prefer to just collect them from the ground as they're so abundant that there's more than enough for us without climbing the trees - or if you're a monkey you can eat them at the source :-) 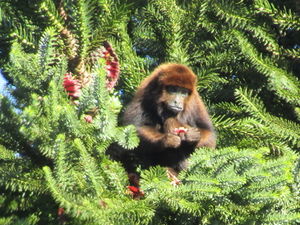 After some coffee we all went into our small forest to collect Pinhão from the Araucária trees which are very common around here. The Pinhão nut is very similar to a Chestnut in texture and flavour. The way to get them is to climb up the tree with a long stick and prod all the fruits that are ready so that they break open and all the nuts (often a hundred in each fruit) pour to the ground. The trees are very tall and have no branches for the first ten metres or so and the trunks are too wide to reach around, so the climber uses a rope and special boots to climb the tree as shown below. 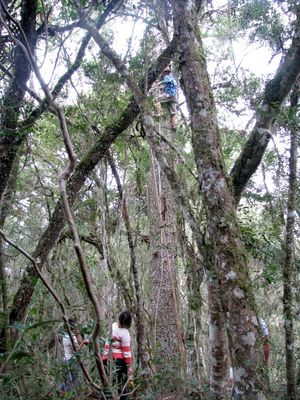 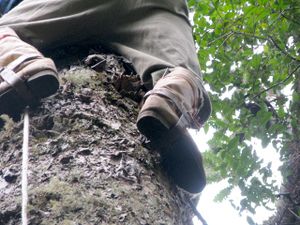 The nuts come packaged in a large spherical fruit which contains sixty to a hundred Pinhão. When the fruits are ripe they fall to the ground and shatter scattering the Pinhão around the base of the tree. Also we found that most of the fallen ones are actually due to monkeys breaking them to eat the Pinhão rather than them having naturally fallen.

They can be boiled to be chopped up and used in various dishes like pesto or soup. Also a simple way to cook them is to put many into a large frying pan directly over the flames and keep moving them so all their sides get cooked. When they're quite black they can be opened very easily and eaten straight away. They're very similar to pine nuts, in fact many people don't know the difference, for example the English wikipedia article for pine nut links to the Pinhão article in the Portguese Wikipedia. The normal pine nut is called "Pinha" which comes from a pine tree (Pinheiro), and "hão" on the end of words means "big", so Pinhãos are big pine nuts :)

But my favourite method of cooking them was introduced by our local friend Eduardo and is called Sapeco. This method is really nice because it's about cooking the Pinhão with the tree's own fallen leaves ("Grinfa") and nothing more. You stack the Grinfa up in a big pile with an indentation in the top to pour the Pinhão into.

The Grinfa are extremely easy to light, even when they have moisture on them you can get them going with a lighter or match with no need for anything else like paper. It's best to light it at three or four locations around the base so it burns evenly. Once it gets going it's like a volcano with really thick smoke and gets really hot. After a few minutes it's all burned and collapsed down, and you then scrape the cooked Pinhão out of all the ashes to eat them. Here's some pictures of us having them for breakfast with Chimarrão :-)

The sun is about 45 degrees high in the north at midday, and it doesn't come into our west window at all. It's been quite dry and the river is quite low. It's still quite hot during the day in the sun, but it gets really cold at night and sometimes there's quite a frost in the mornings.