The idea of MediaWikiLite is to allow the current MediaWiki codebase to run as a standalone server without requiring a database server or web-server so that it can be used like a wiki on a stick. This forms the foundation for a number of alternative uses for the MediaWiki software in environments where the current LAMP architecture is too resource intensive.

There are a number of personal desktop wiki's out there, but they do not use the MediaWiki parser, and making a fork of the parser code defeats the purpose. Also, embedded devices such as PDA's, iPod's and iPhone's can only run lite applications effectively and getting MediaWiki onto them would be very useful, especially if it could synchronise with a web-based mirror when an internet connection becomes available.

A lite version of MediaWiki would make a possible candidate for a client side wiki interface to a P2P article space, i.e. a decentralised Wikipedia or PeerPedia.

As of version 1.13, MediaWiki natively supports the SQLite database which is a program library compiled in to PHP instead of running as a separate server outside of the PHP environment. A running instance of MediaWiki 1.15.1 using the SQLite database can be seen at mediawikilite.org to test the current functionality.

To remove the need of an external web-server such as Apache or IIS, we're using NanoWeb which is a web-server entirely written entirely in PHP and comes with a number of modules such as a mod-rewrite clone for friendly URL's. It can execute CGI scripts using a normal CGI module or a FastCGI module.

I've packaged PHP/SQLite, NanoWeb and MediaWiki together into a self-contained folder structure which can be downloaded from here for testing purposes. The wiki is started by running the wiki.bat file in the base of this structure. Currently it only runs in Win32 environments, but soon the one structure will be able to be moved between Linux, OS X and Windows. The sysop user is WikiSysop with password admin. The database is in a file called wikidb.sqlite in the wikis images directory to be sure it's a writeable location and that it's bundled in with the uploaded file content of the wiki.

Here's a tree view showing the main items in the structure:

The php directory is a standard PHP installation except for some changes in the extension section.

The nanoweb directory is the current NanoWeb condebase with no changes.

The mediawiki directory is a standard current MediaWiki code-base, except for LocalSettings.php and extensions.

The wikidb.sqlite file is the entire wiki database containing all the articles and history (not the images though).

Use the wiki.bat file to start the wiki, soon this will work across platforms, but currently only works on Win32.

Getting the portable structure to run under Linux based systems

Getting the portable structure to run under OS X

Getting the portable structure to run under Win32

I've successfully created a self-contained folder structure containing NanoWeb and PHP which is able to be run from the command line without any changes to the OS. My test folder structure was C:\MyWiki and required config files to be created for both applications which I placed into the root of each (C:\MyWiki\nanoweb and C:\MyWiki\php). In the case of php.ini the only change required was to enable some extensions as follows:

The NanoWeb configuration is a minimal file based on the nanoweb-win.conf sample that ships with it, and required numerous absolute path definitions so the startup script will need to create the nanoweb.conf configuration at runtime. Here's the successful configuration:

The command to then run NanoWeb from this structure was as follows:

To then get the whole structure location-independent the command was expanded out into a generic batch file called wiki.bat which contains the following:

The script first runs a small PHP script called cwd.php which sets the CWD to the base of the portable structure. On important aspect of this script is that it sets it in the old DOS 8.3 path format because the modules directive in nanoweb.conf can't handle spaces even when the value is double-quoted. The cwd.php script uses the SetSFN.exe utility to obtain the 8.3 name. Here's a listing of cwd.php:

The wiki.bat script then calls a second script called make-conf.bat which creates a nanoweb.conf file in the systems %TMP% directory. This step needs to be done because the NanoWeb configuration requires absolute file locations, the script is able to use a file-template based on the configuration shown above and replace all the file paths with the %CD%.

Wiki.bat then starts up a browser loaded with an HTML page called splash.html which is designed to redirect to the wiki main page after a few seconds to give NanoWeb a chance to start up. Launching NanoWeb is the last thing the wiki.bat script does and this command doesn't return until the command window is closed which shuts the web server down.

Here's a screenshot of the portable structure running in a virtual box installed with Windows XP (that I'm allowed to use due to the COA sticker on my computer). 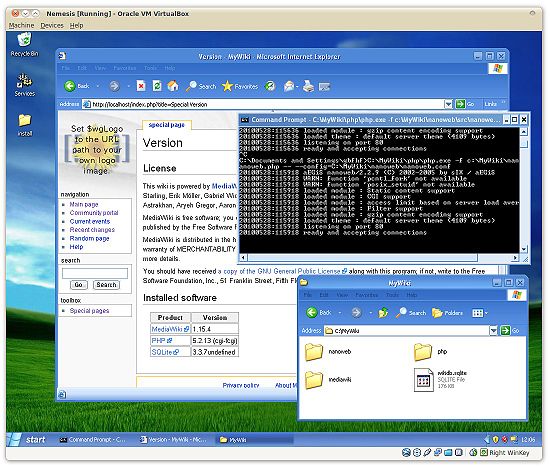 Installing MediaWikiLite as a Debian package (in progress)

For Debian and Ubuntu based Linux users, I'm creating a deb package to install the trio, it will be installed as follows:

Currently we don't have a self-contained folder structure that MediaWikiLite's can run out of, so you'll need to ensure that SQLite is installed into the PHP environment properly. It's important to use SQLite3 rather than 2 because the former supports more similar syntax for some SQL such as table creation. Aside from that, version 3 uses more compact files and executes more efficiently because it works via PHP's PDO functions.

To install NanoWeb and SQLite3 on a Debian based system use the following, I've added xdebug in as it's useful for logging function calls etc for testing:

Check your phpinfo() to see if pdo_sqlite is listed, if not, try adding extension=php_pdo_sqlite.so into the dynamic extensions section of your php.ini.

The default web root is /var/www/nanoweb, so you can unpack a MediaWiki codebase into there and go through the install procedure from http://localhost.