Why should you care? 2 min

How this intro to wikis will help you:

What are some issues you are interested in ? 5-10 min Wikipedia….then

A wiki is the easiest way to add what you know to a place where other people care about what you care about.

Communication is where everything starts. And stops. Problem: communication is the #1 problem in business. Just this morning I was waiting at the doctor’s office, and the lady sitting next to me showed me some paperwork her doctor had sent her, complete with an address, social security number, and a detailed description of the health problem…of a person that she didn’t even know! Wiki’s don’t fix that kind of problem, but it illustrates the types of problems we have in business with communiation.

Email is a solution that everyone uses to communicate. Why? Because it is so easy. But have you ever sent a message that you wish you hadn’t? Email is easy, but think of all the problems it can cause. I worked for the University Of Colorado Health Science Center. Mr. Anschutz, the former CEO of Qwest and Denver Billionaire, had just donated a huge sum of money to the university, and they were going to name the new campus after him. So a press release was sent out via email. Usually, spell check is a good thing. But this time, everyone got word that Mr. Auschwitz had donated a large amount of money, and the new campus would bear that name. (OOPS!) 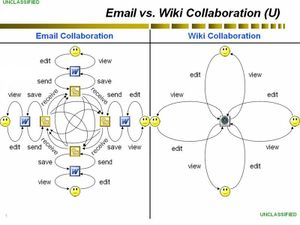 Wiki’s don’t fix that kind of problem, but it illustrates the types of problems we have.

Wikis put everyone on the same page. Literally. Here is a good example…

(have them give examples)

How many of you have heard about a Blog? (some of these terms sound like a 3 year old talking! Did you read my blog about google? Do you think google googled my blog yet? )

Open up for questions…

we don’t know where this is headed…

History of Internet in 2 Minutes

Communication is the key term. Break the word apart: Community. Communion. Togetherness. Understanding. Technology just gets us to the bottleneck quicker.

Everyone is talking about how to represent massive amounts of data that we have collected. The new internet will probably be more like a video game than the flat static web pages we are used to. Look how quickly youtube has taken over. I watch LOST on the internet now! You can watch a ball game on your PHONE!

How a Wiki works

A wiki engine is hosted on a computer server and uses the internet protocol http to allow many people to collaborate online using a web browser on their own computer.

historical information intertwined with it and it is never "final" (now called "nodes", metadata)

Why should I care?

A better way to do things

Who would use it?

Who is using it?

There are many ways to use a wiki. The most common is to just use it to find information you are looking for. People who use it on this level are referred to as readers. You typically do not need a user account to access content at this level.

This big pitcure view is emerging from a number of technologies and generally refers to the newly emerging collaborative internet which is being dubbed Web2.0. Wiki's have become a major aspect of this new arena with MediaWiki leading the way due to the huge popularity Wikipedia and its sister projects.

The problems with the current wiki paradigm will be the main driving force of its evolution. The main problems that wiki users experience are:

In the future, we can expect to see the wiki methodology showing up in the peer to peer application arena which is currently still in its infancy and contains only static files rather than dynamic applicational content such as collaboration tools.