This seagull island was installed in approximately 2007 to address a pattern on intersection crashes that had been occurring, and also as an attempt to reduce delays for right-turning drivers trying to get out of Corban Avenue during the morning peak period when eastbound flows are heavy on Henderson Valley Road which is an arterial road in Waitakere, Auckland. Duncan Campbell was the designated traffic engineer from Waitakere City Council who carryed the design through to construction.

Corban Ave is an industrial road with significant volumes of large trucks entering and exiting, so needed to be designed for semi-trailer manoeuvres. The seagull island is quite a small one at only around six metres long, and the geometry at the intersection is in quite confined. The merge distance on Henderson Valley Road is substantially shorter than standard Austroads seagull design, being only some 70 metres in length. The result is an improvement to the previous situation, although the confined nature of the seagull island layout is still an issue with respect to maintenance of the signs which are damaged reasonably regularly. The short merge appears to operate satisfactorily enough and Council had received no public complaints for several years regarding its operation since its installation around late 2007. For googlemap view refer:[1] 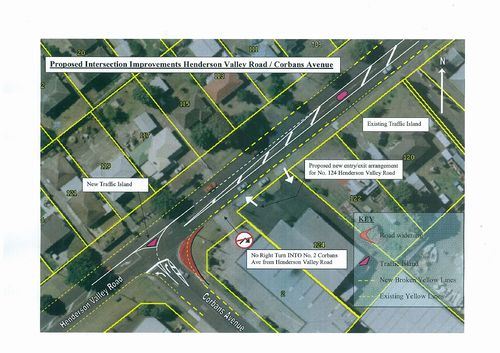