We have a small river on our land which has a reasonable current available, especially during winter, so we want to use the current to generate power and perhaps later to pump water as well.

We'll be making an undershot wheel because we have no significant drop in height available to make use of. The most efficient undershot design is the Poncelet design. If we were to create a barrier in the river to force the water through a narrow channel, then some of the Micro hydro turbine types may be appropriate instead (and such a channel would also benefit the water wheel, so may be worth doing anyway). 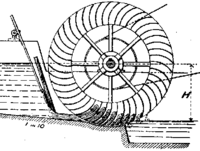 Generating power from the wheel

Using the river for power is far superior to solar because it doesn't need any storage, and it can use a Doubly fed generator design combined with a gearing mechanism to deliver AC at the 50-60Hz thus avoiding the need for expensive inverter equipment. Such generators are difficult to wind oneself, but these are the type used in all petrol generators, so it would be quite cost-effective to get another petrol generator and extract the necessary parts from it, or maybe to buy one cheap that has a damaged petrol section.

These generators will need to be turned at around 3000rpm, so a lot of gearing will be required since the water wheel will be turning at a very low rate, probably around 20rpm for a large wheel.

Pumping the water with the wheel

The water supply for our house needs to be raised at least five meters high so that there's a reasonable pressure for the taps and shower. We're going to make a spiral water pump to use the streams own current to pump the water up to the tank. A spiral pump is a water wheel that has a spiral of tube attached to the side so that it moves the water in a similar fashion to an Archimedean screw. Another project here has exactly the same idea but they've already evolved theirs down to a nice compact design which we could base ours on. See also this detailed PDF on spiral pump designs, LurkerTech's article and this Spiral pump video, or for other kinds of water powered pumps, see our water article. The coil doesn't actually have to be a spiral, a helix is fine - in fact many basic DIY designs just use a randomly coiled bundle of pipe.