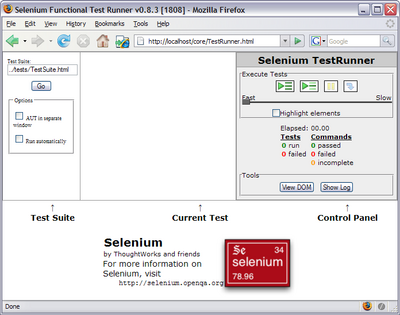 Selenium Core is a test tool for web applications. Selenium Core tests run directly in a browser, just as real users do. And they run in Internet Explorer, Mozilla and Firefox on Windows, Linux, and Macintosh. No other test tool covers such a wide array of platforms.

Selenium Core uses a unique mechanism which allows it to run on so many platforms. Written in pure JavaScript/DHTML, you copy Selenium Core tests directly into your your application webserver, allowing the tests to run in any supported browser on the client-side. Thus, you must have write access to the machine your web application server is running on to install Selenium Core.

Selenium Core was developed by team of programmers and testers at ThoughtWorks. It is open-source software and can be downloaded and used without charge. It is currently under active development by our team. Stay tuned for updates and further announcements.

ThoughtWorks is a leader in Agile development methods for enterprise software development. Selenium is designed specifically for the acceptance testing requirements of Agile teams. However, teams using more traditional development will also find it useful.

Selenium is a browser testing environment for testing the various aspects of a sites features and functionality from a users perspective. We see this as an extremely useful tool for use in the MediaWiki environment, for testing MediaWiki installations and installed extensions. Such tests could be maintained along with extension code and documentation by the community responsible for that extension.

Selenium is available for many programming environments including PHP. The tests are written in a simple language called Seleniumese which can be contained in many common textual structures such as XML or HTML. Essentially tests are just lists of Selenium function calls so if tests were maintained as articles in the wiki, a bullet list would be most appropriate. There are also test suites which are in a similar format to the tests but refer to a list of tests rather than a list of functions. We have some example tests which act on a wiki here.

For installation and usage instructions, see MW:Extension:Selenium which explains how to install the core along with the MediaWiki Selenium extension.