The awesome power of gambiarra

From Organic Design wiki
Jump to:navigation, search
More posts by Nad: < Prev | Next >
Posted by Nad on 25 March 2015 at 21:28
This post has the following tags : Our third year on the land

Now that we're on a daily schedule we seem to getting a lot more done on the land even though we have so much meditation to do each day! Beth's been making excellent progress painting the inside of the house and cutting the grass and weeds around the vege patch and other areas on the land. And I finally completed the east extension which has been an outstanding job for at least a year! 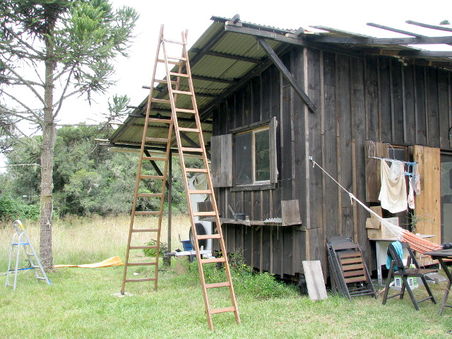 Over the last few days I've been working on getting the upper segment of the PVC pipe containing the net cables raised overhead so we don't end up with the same, or similar, trouble as the lower segment (i.e. having it eaten by giant swamp rats!). This job turned out to be a lot more difficult than expected, because the weight of the hundred or so metres of PVC pipe made the force required to pull the wire straight into the equivalent of hundreds of kilograms! The standard fence wire-tightener was useless in this scenario because it's made of too thin a metal and also the force required to turn the bolt soon becomes too much.

So I had to let the cable back down and figure out a different approach. The next day when making a hole for Beth I suddenly realised that the hole-making tool I was using could work as an excellent high-force wire-tightener if it had a hole drilled in the middle! This new Gambiarra tool worked very well, and before long I was able to pull the wire tight with hundreds of kilograms of force no problem :-) 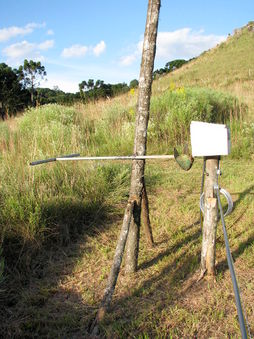 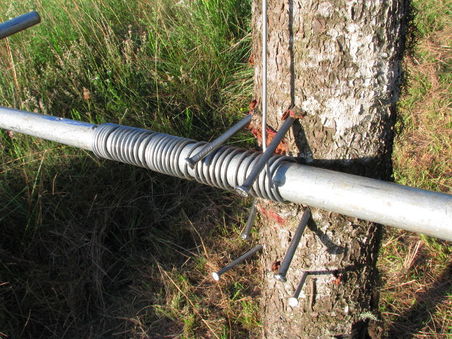 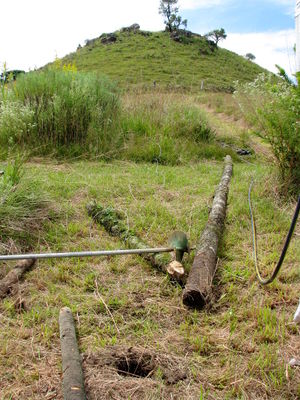 The force was so much that the whole pole was ripped right out of the ground!!!

Actually it was a bit of a design failure because since the force is pulling from above the pole, the forty-five brace was of little use in strengthening it, so yet again I had to go back to the drawing board :-(

The next day I added a new shorter pole about four metres behind the tall one and put it deeper in the ground and put it at an angle roughly perpendicular to the direction of the force. The original pole is now just lifting the cable so it only experiences a downward force and needs no braces, it's settled to an angle halfway between the directions of the short pole and the top of the hill. So far this solution seems to be holding up! 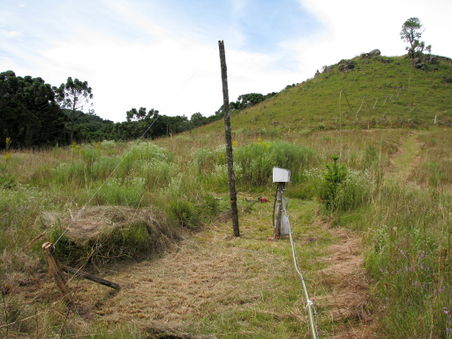 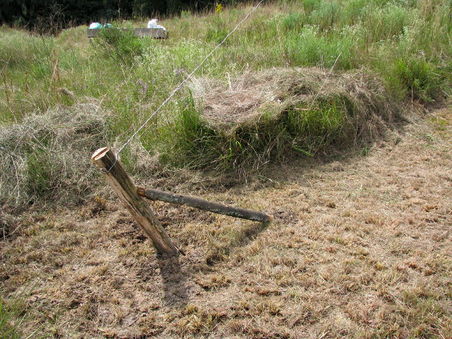