From Organic Design
Jump to:navigation, search
More posts by Nad: < Prev | Next >
Posted by Nad on 29 November 2020 at 04:11
This post has the following tags : Our third year on the land

About a week ago when I was working on the east extension a guy suddenly stumbled out of a thick part of the bushes. He was looking for his dog Xispita who'd gone missing a couple of days earlier, he carried on into the forest and we heard him calling her name for a while. The next evening we heard a dig crying in the forest somewhere and went for a walk calling out to her, but she didn't answer. Then about a week later when we were having breakfast a dog suddenly appeared out of the bushes at about the same place the guy had appeared before! We're not sure if it's his dog though because he said she was white, whereas this one has more brown on her than white, but we started calling her Xispita anyway :-) 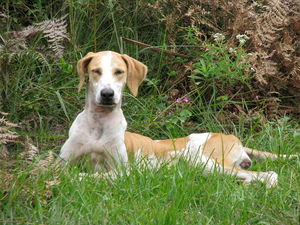 She wasn't very well and seemed to have a bit of a fever, she ate a bit the first day, but then wouldn't eat at all the next day (although maybe its just that she didn't like polenta, lentils, beans or porridge!). She was very cold in the night and we had to put a towel on her so she'd stop shivering. 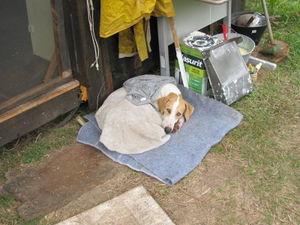 The next day after an hour or two in the sun she started looking a lot better, and then ate a bit of polenta. She started seeming like she was at home, exploring the garden and following us whenever we went of to do work at remote areas of the land :-)

Update: We went to Ziza's the other day to get some cheese, and who did we see tied with a rope in the garden? Xispita! It turns out it was the original Xispita that the guy was looking for, so even though we were sad that she's gone, it's good that she'll be back with her proper owner again :-) He takes her out to the country in the weekend to get some fresh air and to run around in the forest, but because she's a city dog, she sometimes gets lost for a few days.