From Organic Design wiki
Jump to:navigation, search
More posts by Nad: < Prev | Next >
Posted by Nad on 28 June 2022 at 02:55
This post has the following tags : Our second year on the land

Beth was drying the washing with our portable 500W centrifugal spinner dryer when all of a sudden we heard a loud bang and then the horrible familiar smell of burning electronic components! I took a look and saw that smoke was coming out of the 800W inverter!! luckily this is not our main inverter that we use for running the lights and computers, the 800W is only for tools and other high power appliances, but it's still a major problem to have it blow up because it would take weeks to get a replacement. 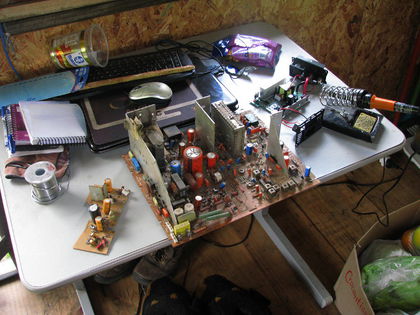 I opened it up and found that everything looked fine except for two electrolytic capacitors used to smooth the input power which had exploded and ejected their burning electrolyte liquid all over the inside of the case. I found this quite strange because they were rated for 25v but the input can never exceed the maximum voltage of the battery which is about 14.5v.

After doing a bit of research I found that the problem was most likely the "capacitor plague" which affected millions of capacitors made about ten years ago and used by many companies in all sorts of devices from vacuum cleaners to computers, and the typical symptom is capacitors exploding well before their normal lifespan and well within their specified voltage.

The problem is that there's nowhere in Canela or Gramado that sell electronic components and ordering by net would take at least a week, probably two to sort out. But as luck would have it, I saw an old TV at the side of the road in a pile of rubbish, and TVs always have loads of capacitors in them! so we threw it in the car and when we got back I pulled it apart and pillaged all the capacitors from it - they're probably thirty years old, but they're Siemens which is one of the best brands in the business and things tended to be made better back then too :-) I found a couple that would do just fine and they were rated at 40v which is nearly triple what's required so there should be no problems. I installed them in the inverter and sure enough we're back in business!